Hat Puntano an exciting horse to follow in SA

But this classy individual has not raced since July last year. 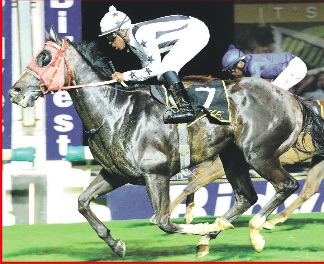 There’s some nice competitive racing at Turffontein tomorrow when the meeting is on the Inside track.

One of the most interesting runners at the meeting must be Hat Puntano, who makes his South African debut in Race 7, a Pinnacle Stakes over 1450m.

This Argentinian-bred four- year-old colt is obviously on the road to a more lucrative career as a stallion, being owned in part- nership with Drakenstein Stud, and his form in his home country is impressive.

The shorter distance of this race should not be a worry because he won over 1400m by a whopping 16 lengths in his debut.

Said trainer Mike Azzie: “The horses he beat there are not slouches and some have gone on to win Group 1s – one was Horse Of The Year in Argentina and another won the equivalent of the Queen’s Plate.”

That is exceptional form to bring to a spring meeting at Turffontein and under normal circumstances punters could close their eyes and pile in.

However, Hat Puntano has not run since July last year, and he is drawn wide over a distance where the draw is crucial on the Inside track. Azzie agrees “he has it all to do from that draw”.

He said: “We haven’t put him under any pressure, we’re bringing him on very slowly. His owners want him to have a good experience on Saturday, so we’re taking him to have a nice look-see. But if he does win it will be a bonus.”

He looks sure to start at a reasonably good price and with his immense class, looks worth at least an Eachway punt. However, it would probably be wise to include other runners in the carryover Pick 6, like Toro Rosso, Amazing Strike and Count Tassilo.

A couple of really nice llies will be stepping out in Race 6, a FM 83 Handicap over 1450m.

Three-year-old Silver Thursday has run three times to date, winning her debut over 1200m before being thrown in at the deep end in the Fillies Nursery. She was reportedly “never travelling” and finished 10th behind Green Plains. The next month when sent over this course and distance, she did much be er in finishing second to Folk Dance.

If she is anywhere near best after a 104-day rest, Silver Thursday will be hard to beat. Watch the be ing and any support should be followed.

Sweet Lady Jade, although she has been well beaten in her last two starts and returns from a 189 day rest, could be second best. Her first four starts included two wins and two placings. The latest place was a third behind Dame Eleanor over this course and distance and that run gives her a good chance.

Box the Exactas and take Swingers with Silver Thursday and Sweet Lady Jade.