The Eric Sands-trained six-year-old has slipped from his spot at the top of the betting boards last week to be 5-1 third favourite. 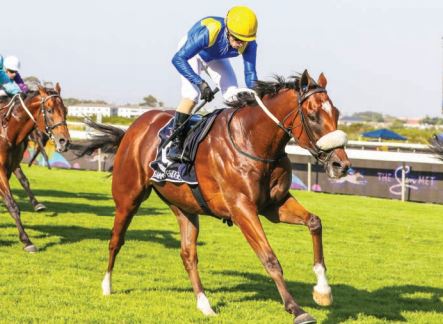 Rainbow Bridge, South Africa’s top-rated racehorse, has been allotted top weight of 60kg for the 2021 Vodacom Durban July to be run at Greyville racecourse on 3 July. Picture: Supplied

The Eric Sands-trained six-year-old has slipped from his spot at the top of the betting boards last week to be 5-1 third favourite – below Got The Greenlight and Linebacker.

Four-year-old Got The Greenlight, runner-up in the 2020 July, is the new favourite at 3-1 after being assigned 55kg. Three-year-old Linebacker, who has slipped half a point to 9-2, got the minimum impost of 53kg.

Thirty-one horses were weighted for the country’s biggest race at the final supplementary stage on Tuesday – most of the males under sufferance at 53kg and three of the females at their minimum of 52kg – including Triple Tiara champ and 12-1 July shot War Of Athena.

The latter is also entered for the Grade 1 Garden Province Stakes on July day, for which she has been given 59kg and, significantly, has drawn the extreme inside starting stall – giving trainer Paul Matchett plenty to think about.

The July barrier draw takes place next week, on 22 June, when the final field of 18 runners and two reserves will be announced. Final declarations – including final jockey bookings – will be made the previous day at 11am.

Snaith’s stable jockey Richard Fourie has opted for dual July winner (2018 and 2019) Do It Again over Belgarion, who he steered to victory in 2020. Former national champion S’Manga Khumalo gets the nod on 9-1 shot Belgarion, who must shoulder second-top weight of 58kg.

Snaith has a further three entries among the 31 left in the race – who might or might not crack the golden invitation for 3 July.

40-1 and upwards the others

Weights for the Grade 1 Vodacom Durban July over 2200m: