And people thought the hallowed domestic competition is becoming rather boring... 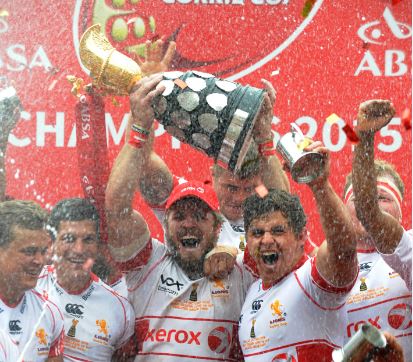 The Lions can still claim a home final like they did in 2015. But it will take some doing. Photo: Gallo Images.

The spring is back in the step of the Currie Cup as huge excitement brews ahead of the two big semifinals on Saturday in Durban and Cape Town.

The Sharks and Western Province will host the Blue Bulls and the Golden Lions respectively courtesy of finishing first and second on the log.

The Lions finished third and the Bulls fourth.

Quite remarkably, three of the four team could still potentially host the final next weekend, with the Bulls the only side who’d have to travel regardless of results.

The Sharks need to beat the Bulls to host the final and will then play the winner of the later semifinal at Newlands between Province and the Lions.

However, if the Bulls surprise the odds in Durban they will play the final either in Cape Town or Johannesburg.

For the Lions to play host the final they need to beat Province and then hope the Bulls surprise the Sharks.

Province could host their first final since 2014 if they beat the Lions and if the Sharks lose in Durban, but if they win and the Sharks win too they will set up a repeat of the final of 2012 when Province surprised the Sharks 25-18 in Durban.

The Sharks, however, are the outright favourites despite their defeat last week to Province.

It’s thought the Durbanites probably lacked a bit of desire after already clinching top spot and home advantage in the playoffs.

The Bulls have been attacking with intent over the past few weeks and have been spearheaded by brilliant fullback Warrick Gelant and their chances shouldn’t be discounted.

Province demolished the Lions 39-3 the last time they met in Cape Town, but since then the Lions found their rhythm.

The return of their five non-contracted Springboks made a massive difference.