More woe for Springboks as they lose to a weakened Wales

A poor start ultimately derails a brave comeback for Allister Coetzee's troops as 2017 ends with even more uncertainty over the future. 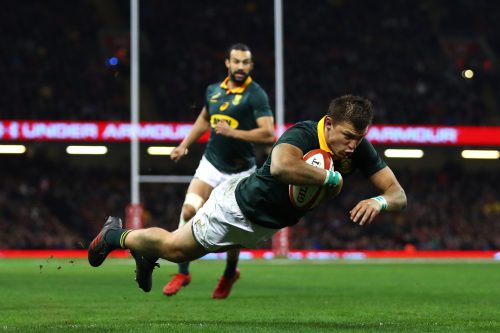 Not even a fine fightback could prevent the Springboks from going down 24-22 to a weakened outfit Wales in Cardiff on Saturday.

Two crucial handling errors by replacement flyhalf Elton Jantjies in the last 10 minutes cost the Boks dearly in their quest to seal a comeback while their poor handling under the aerial kicks was a major handicap throughout.

That said South Africa’s scrum was their biggest weapon again but there was perhaps an over-reliance on it.

The Boks fought back bravely after being down 21-3 deep inside the opening half and took the lead for the first time in the game when centre Jesse Kriel bulldozed his way over for his team’s third try in the 55th minute for a tender 22-21 lead.

However, Wales fullback Leigh Halfpenny booted a crucial penalty in the 68th minute to give the home side the two-point cushion.

Wales centre Hadleigh Parkes, a former Blues and Kings player, made his debut and actually only qualified on Friday for his adopted country. He made full use of this golden opportunity by scoring two of his team’s three tries in that crucial first half, showing fine all-round skills.