South Africa's leaders in Super Rugby are known for their attacking rugby but at Loftus their pack of forwards shone. 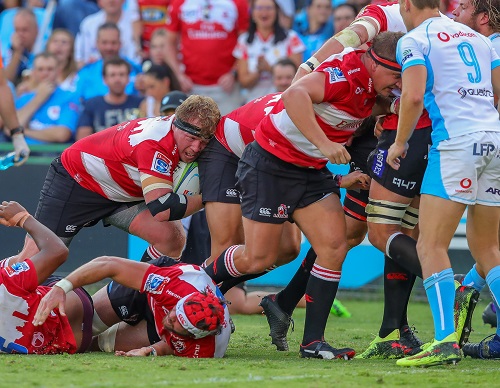 The Lions' pack was magnificent. (Photo by Gordon Arons/Gallo Images)

The Lions’ abrasive pack of forwards are their “bread and butter”, enthused coach Swys de Bruin after their comprehensive 49-35 Super Rugby win in the much-anticipated Juksei derby over the Bulls at Loftus Versfeld on Saturday.

The Lions maintained their unbeaten run after three rounds and top of the standings on both the SA Conference and the overall log, albeit having played an extra game.

“We have said over the last few years we can only play the game we want to play if the tight phases are good,” said De Bruin.

The foundation for the win was laid with two tries from mauls early in the match by props Ruan Dreyer and Jacques van Rooyen, while a third followed in the second half by Man-of-the-Match Malcolm Marx.

In the end, the Lions outscored the Bulls by seven tries to four.

“Three of the tries were maul tries and gives the pack a lot of character and confidence,” he said.

To the Bulls’ credit, they stayed in touch with three penalties by flyhalf Marnitz Boshoff, while tries either side of halftime saw them draw level 21-21 shortly after the interval.

But two yellow cards for prop Conrad van Vuuren and flank Nick de Jager in quick succession left the hosts vulnerable and the visitors cashed in to all but kill off the contest.

“It was nerve-wracking to come to Loftus and they wait for you here,” said De Bruin.

“Hats off to coach Philip (Lemmer, forward coach) and (flank) Franco Mostert for executing the mauls so well. It was part of the plan and it went well.

“But we will have to work on our mistakes, there were definitely quite a few things we can work on, especially in those last 10 minutes.”

The Lions’ next take on the Blues at home on Saturday, while the Bulls face the Reds in their match on the road in Brisbane.