Rassie: Handing so many debuts mean nothing if you lose

The Springbok coach's era got off to a false start as mistake after mistake cost his inexperienced charges dearly. 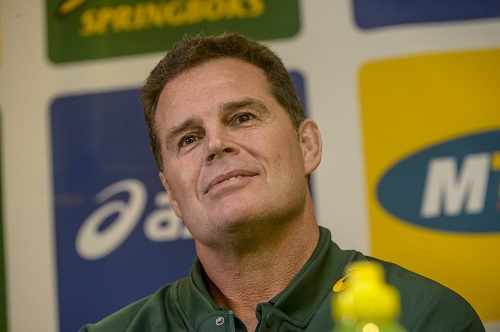 Coach Rassie Erasmus of the Springboks during the Springboks team announcement media conference at Livorno Room, Tsogo Sun Montecasino on May 30, 2018 in Johannesburg, South Africa. (Photo by Sydney Seshibedi/Gallo Images)

Poor execution in their kicking display was the main contributing factor to the national team’s 22-20 defeat to Wales, Springbok coach Rassie Erasmus lamented after their opening tour match in Washington DC at the weekend.

With the loss creating more pressure ahead of the first of three Tests against England at Ellis Park this weekend, being more clinical on defence was another main concern.

“All their tries were scored as a result of kicking – a charged down kick and box kicks we failed to control – and also we committed some defensive errors,” Erasmus said.

“We had our chances to score, and overall I think it was the pressure which they were able to put on us at the end that won it for them.”

First-half tries by fullback Hallam Amos and scrumhalf Tomos Williams gave Wales a 14-3 lead at half-time, and they scored their third and final try right at the end of the match when reserve hooker Ryan Elias dotted down after a clearance kick by Robert du Preez was charged down.

“It’s never nice when you play your first Test and you lose, and we didn’t want that result, but we wanted to get all of the 13 uncapped players on the field and start building towards the future,” Erasmus said.

On the bright side, the Boks fought their way back to take a late 20-17 lead thanks to second-half tries by debutant wings Makazole Mapimpi and Travis Ismaiel, and penalty goals by Elton Jantjies and Du Preez.

“But we still lost, and that almost nullified the fact that we capped a lot of new players,” Erasmus said.

Set to revert to his first-choice selection for the first England Test, Erasmus could include all five overseas players in this week’s team.

“We will have to step up against England,” he admitted.

“We know the pressure will be on us to win, just as they will also be under pressure to be successful following their recent results.”