I got my tactics wrong, admits Rassie Erasmus

The Springboks might have launched one of the best comebacks in their history but they certainly looked directionless at the start of the Ellis Park epic. 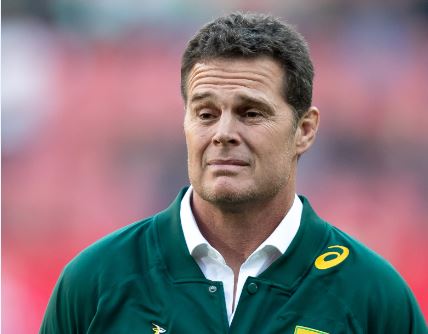 Springbok coach Rassie Erasmus said he takes the blame on himself after the Springboks’ disastrous start in last weekend’s first England Test at Ellis Park.

Before a big crowd of 55 610 could even settle into their seats, the Boks were trailing 3-24, but produced a massive fightback to win a pulsating contest 42-39.

“When they named three flyhalves in their backline, I honestly thought they would kick a lot. Instead, they gave the ball a lot of air and ran hard at us. It was a tactical error on my side,”  admitted Erasmus.

“I think we regrouped well to change our tactics. We probably didn’t have enough width, but congratulations to the senior players, who responded well.

“We definitely have to fix that defence though.”

“It was not the start we wanted with a lot of youngsters in the side and if we got 50 against us we could’ve started to doubt team selections, but we’ll have to be bold in making calls and we probably will lose some games along the way,” he said.

Meanwhile,  Jones was full of praise for the two new Bok wingers Aphiwe Dyantyi and S’bu Nkosi, who scored three tries between them.

“Those two wingers will give Usain Bolt a run for his money,” he said.

Bulls prop Trevor Nyakane, who was named in the starting line-up Ellis Park but withdrew, has been ruled out for the rest of the series with a rib injury.

Nienaber: 'French camp will help get SA-based Boks up to speed'
12 hours ago
12 hours ago

Nienaber: 'French camp will help get SA-based Boks up to speed'
12 hours ago
12 hours ago