Judge us on the World Cup, pleads Springbok guru

Forwards coach Matt Proudfoot admits though that he and the rest of the coaching staff are expendable, whether it's right or wrong. 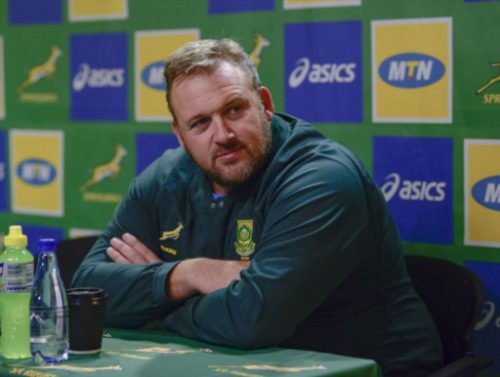 There’s much doubt at the moment how much unity there is in the Springbok squad but Rassie Erasmus’ coaching staff are clearly on the same wavelength.

Following the national mentor’s rather frank statements on Monday, which suggested he’d be dismissed from the job if the Bok lose heavily to the All Blacks on Saturday, forwards guru Matt Proudfoot again reminded all that everyone is expendable.

ALSO READ: My job is on the line, admits Erasmus

However, the former Scottish prop is far calmer about the whole situation.

“We realise as coaches and management – and this is driven by Rassie – that if we have to get fired for an individual loss or series of losses, then so be it,” he said.

“We started a process that will develop a team that’s competitive at the World Cup and represents South Africa as a nation united, that’s what this squad is about.”

Indeed, one the the Boks’ biggest challenges is marrying positive results while developing depth.

“Rassie has made it very clear that if we don’t get transformation right, if we don’t get the squad right to be competitive at the World Cup, it doesn’t matter what we do. Bringing a squad together that could win an individual game isn’t what it’s about for us.”

“We hear it, obviously you listen to it. For all the people who criticise there are people supporting us. I can show you my phone and the messages of support we get from past players,” he said.

“They can see the effort and what this team is doing on the field. Mistakes are going to happen when you’re developing a side.”