Four things the Springboks need to do to boss at Twickenham

Saturday's Test against England is most certainly going to require them to be adaptable and, crucially, error-free. 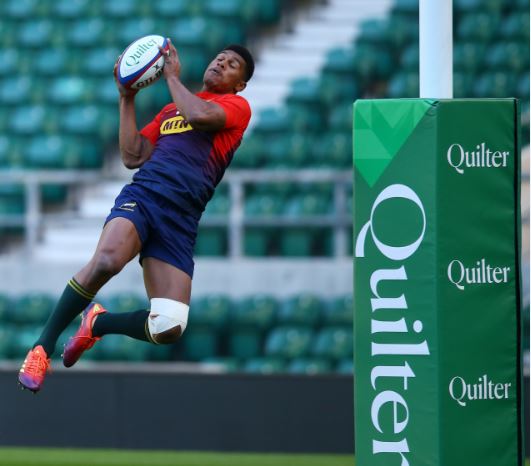 Damian Willemse will probably have to do a lot of this. Photo: Gallo Images.

While there’s a sense that the Springboks’ meeting with England at Twickenham on Saturday afternoon is an opportunity to test depth, Rassie Erasmus and his coaching staff need to be wary of a negative result.

A loss could suddenly make this four-game European tour particularly awkward, given that he needs to balance development with victories.

Can a potential loss of confidence be afforded?

In the cauldron that is England’s rugby fortress, here’s what the Boks need to do topple their weakened but still highly competitive hosts.

Back three need to keep it simple

Damian Willemse, S’bu Nkosi and Aphiwe Dyantyi have all made their marks as hugely exciting Test players.

But in the heavier, slower conditions of Europe, they’ll be thoroughly tested, especially without an experienced figure like Willie le Roux next to them.

Erasmus’ selection of all three is understandable as they need to be exposed to stern challenges.

Nkosi and Dyantyi possess the all-round games to thrive, but Willemse has a massive responsibility in terms of executing a tactical kicking game.

Perhaps the best course of action would be to simply tell them to err on the side of conservative yet one doesn’t want to inhibit them.

So, just play it as you see it…

The former Bulls mentor, who’s now England’s defence coach, played a definite role in their development this past year and as a result will be able to provide his new side with interesting insights.

But that doesn’t mean Van Zyl in particular should pull a rabbit out of the hat.

Mitchell rated him highly because the 23-year-old is one of South Africa’s best defensive and tactical scrumhalves.

That’s exactly what the Boks need for him to execute, regardless of whether England know it’s coming.

A hooker needs to balance the loose trio(!)

Skipper Siya Kolisi and Warren Whiteley are speedy ball-carriers and fine tacklers, while everyone is familiar with Duane Vermeulen’s virtues.

But Vermeulen might be a bit too slow for the No 7 position and his partners don’t prioritise slowing ball down at the breakdowns.

That’s where the indomitable Malcolm Marx comes in.

In the absence of men like Marco van Staden and Francois Louw, he’ll have to play his de facto fetcher role.

Esterhuizen could be a trump card

Andre Esterhuizen has grown this year into a more versatile player, especially at Super Rugby level.

However, one still doesn’t consider the beefy midfielder as much of an impact player.

In the latter stages of contests, there’s always a need to playmakers to deliver pieces of magic.

Yet in expected slower conditions, direct runners like him, who break tackles, are actually more valuable in terms of creating attacking momentum than a twinkle-toed teammate.

And he’s pretty good at that…