The Super Rugby franchises have challenges on their hands as mass defections and Bok duty make them dig deep. 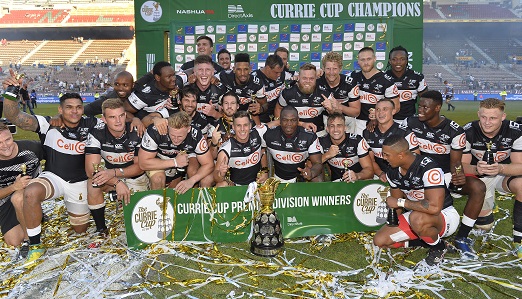 A view of the Sharks celebrating as champions of the Currie Cup final with the trophy during the Currie Cup final match between DHL Western Province and Cell C Sharks at DHL Newlands on October 27, 2018 in Cape Town, South Africa. (Photo by Ashley Vlotman/Gallo Images)

The future stars of South African rugby will be on display when the annual Currie Cup competition kicks off this weekend.

While the top four teams – the Sharks, Western Province, the Blue Bulls and the Golden Lions – have all been weakened by overseas departures and national callups, the domestic competition has become widely regarded as a breeding ground for Super Rugby sides and the Springbok squad.

And while the competition starts earlier than usual, and has also been watered down, it is still a contest of national interest.

This year’s Currie Cup consists of only a single round, with each of the seven teams playing six matches (three at home and three away) before the semifinals.

The Cheetahs, Griquas and Pumas could add some spice to the competition.

The Cheetahs in particular could be seen as a dark horse team, according to Province coach John Dobson, because they will be at full strength and will not be disrupted by the Pro14 series which starts after the completion of the Currie Cup.

The Sharks, as the current champions after beating Western Province in the final at Newlands last year, will open proceedings against Griquas in Durban on Friday night, and they will be charged up after recently winning the SuperSport Challenge final against the Pumas.

On Saturday the Lions will host the Pumas, while in the later game Province will welcome the Blue Bulls to Newlands as the traditional foes continue their north-south rivalry.

Though the Sharks kick off as favourites, Province should also be among the leading contenders.

While both sides have lost a few stars, they will field line-ups that boast plenty of Super Rugby experience.

The two teams which have been rocked the most by player departures are the Blue Bulls and the Lions, and the Joburg side will have a battle on their hands with a very youthful squad.

The Cheetahs have already named scrumhalf Tian Meyer as their captain, while the Blue Bulls have named centre Burger Odendaal as their leader and the Sharks have named co-captains in centre Jeremy Ward and No 8 Tera Mtembu.

The Lions and Province are expected to unveil their skippers on Thursday, with the Lions likely to opt for scrumhalf Ross Cronje and Province for lock Chris van Zyl.