As the man who's scrummed next to him for most of 2019, Schalk Brits has experienced his Bulls and Bok teammate's rise first hand. 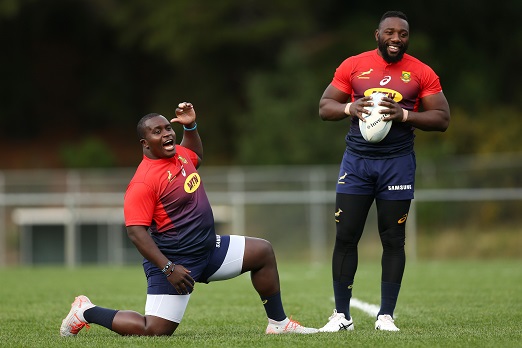 There is at least one person who is not surprised by the rise of Trevor Nyakane, who has lifted his status to No 3 in the
country in his new position, with veteran hooker Schalk Brits backing the Springbok tighthead prop.

After struggling to make the shift from loosehead, Nyakane, 30, produced powerful performances in the recent Rugby
Championship away Tests in Wellington and Salta.

“I can’t take any credit for Trevor’s great scrumming. He has really put in the hard work,” said Brits, who captained the Boks in their victory over Argentina at Loftus last week.

“I know people call the scrum the ‘dark arts’ but to move from loosehead to tighthead and to perform so well is incredible.”

With five props set to be named in the World Cup squad next week, it seemed Nyakane, Frans Malherbe, Beast Mtawarira, Steven Kitshoff and Vincent Koch would get the nod.

Being a Super Rugby teammate of Nyakane’s, Brits said the work of scrum coaches Daan Human at the Bulls and Matt Proudfoot at the Boks deserved mentioning.

“I take my hat off to Trevor, but he is an individual and the scrum is an eight-man effort. They all have to push.

“But then Daan Human has put in a lot of effort in the Bulls scrum, so it’s nice to also see the Bok scrum functioning.

“And then from my perspective, Matt Proudfoot puts in a lot of work to do something that is a bit different to the Bulls, so that is great, to take the best of both coaches and make it work.”

“People see me as a 100kg hooker, but I love the scrumming and that’s why I don’t play centre or flank,” he said.

“The scrum is a beauty of rugby and it’s the only place you can’t hide, and if you don’t do your work you get pressed into a little bin. It’s a tough place to be.”