Bosch on song as Sharks shock WP in Newlands ‘farewell’

The men from Durban scored the only try of the match, through young lock JJ van der Mescht, and they will now meet the Bulls in the Currie Cup final. Curwin Bosch of the Sharks was one of the big heroes of his team as they shocked Western Province in the Currie Cup semifinals at Newlands on Saturday. Picture: Getty Images

With flyhalf Curwin Bosch doing the damage with his boot and lock JJ van der Mescht scoring the game’s only try the Sharks secured their first Currie Cup final against the Bulls since 2008 after shocking Western Province 19-9 in their semifinal at Newlands on Saturday.

The Bulls secured their spot in the final at home at Loftus Versfeld earlier on Saturday by beating the Lions 26-21.

In an emotion-filled final game at the picturesque Newlands, Sharks flyhalf  Bosch – who scored 14 points with the boot – helped to spoil the party as he added a conversion and a drop goal to his earlier three penalties to send the Sharks into a 12-9 lead deep in the second half.

In what was thought to be the first try of the game, the attempt by Sharks flank Thembelani Bholi was ruled out 12 minutes from time because of obstruction by lock JJ van der Mescht, which added further tension in the closing stages.

Van der Mescht then however scored the game-clinching first and only try of the game moments later to send the Sharks clear at 19-9 and silence the home team’s effort.

Moments earlier the home team leveled the scores at 9-9 shortly after the restart after the Sharks initially lead 9-0, showing their intent. The Sharks’ pressure game though showed dividends as the time ticked away.

While the screeching whistle of referee Marius van der Westhuizen didn’t help to get the game flowing, the intensity of the contest still made it the spectacle everyone hoped for. This, after both their earlier matches against each other in the restructured scheduled were called off due to Covid protocol. 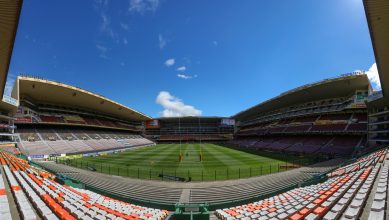 The semifinal was the final game at Newlands for Western Province. Picture: Getty Images

In the first half the Sharks did well to take the home team out of their comfort zone by targeting the breakdown and putting massive pressure on the Province lineout ball.

The Sharks though gave up their strong position when they lost prop Ox Nche to the sin-bin, but it mattered little.

Despite dominating territory and possession Province had to wait until the 25th minute to put their first points on the board through a penalty by flyhalf Tim Swiel.