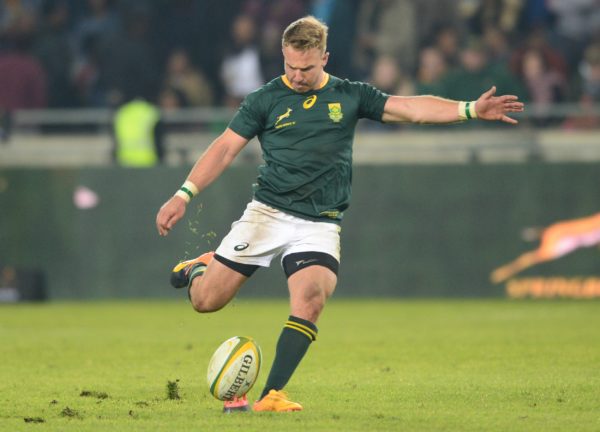 Fred Zeilinga in action for the South Africa A team. Picture: Gallo Images

Fred Zeilinga will soon get a chance to show whether he can fill in for Elton Jantjies should the Lions captain be called away for international duty, according to head coach Cash van Rooyen.

Zeilinga, the former Sharks and Cheetahs pivot, has started training with the Lions, but they also have Jordan Hendrikse and James Mollentze to cover for Jantjies and Tiaan Swanepoel should both become unavailable.

“Elton is with us and training and there’s no chance of him leaving us,” Van Rooyen said after naming his team on Monday for their Preparation Series clash with the EP Elephants in Port Elizabeth on Wednesday.

“We just felt we should give Fred a four-week offer to train with us, so he is on trial.”

ALSO READ: EP Elephants will be better prepared this time – Lions No 8 Horn

Zeilinga joined their training squad last week, and Van Rooyen hoped they could give him a chance over the next few weeks in case Jantjies had to be involved in the Springboks’ series against the British and Irish Lions.

“We are looking at a 10 who can come into the system and Fred played everywhere and won trophies, and he gave us a ring and said he was keen to come and show what he can do,” said Van Rooyen.

Shifting their focus to the EP match, interim Lions coach Mziwakhe Nkosi said they were not going to let their guard drop despite the Elephants’ big defeat at Loftus 10 days ago.

“EP came unstuck against a very good Bulls team, but we have a young team as it is, so we are looking if guys can perform in our system,” Nkosi said.

“We are by no means going to tell the guys to throw caution to the wind or to open up. We just want to implement what we have been adding to our system the last fortnight.”

ALSO READ: Five rookies to keep an eye on in Preparation Series

Nkosi said they were excited to give more youngsters a go on Wednesday and the loose trio of Ruhan Straeuli, Sibusiso Sangweni and Mark Snyman were a prime example.

“We are very excited about our loose trio and probably a very accomplished one with Sibu a Junior Bok, while Mark is an exciting No 6 and was probably unlucky not to have got a run in our previous game,” he said.

“Ruhan gives us height at the tail of the lineout and will probably deputise as a lineout caller as well.”