Injury scare for Elton Jantjies ahead of Rainbow Cup

The Lions medical staff are expecting to have a clearer picture on the skipper's condition in the next couple of days. 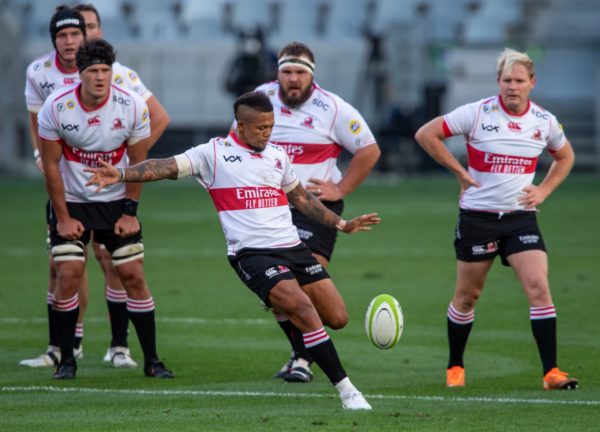 The Lions will be sweating over the fitness of captain Elton Jantjies after the Springbok flyhalf left the field injured in their final Preparation Series game against the Stormers in Cape Town on Saturday.

Jantjies left the field seven minutes before half-time to be replaced by Fred Zeilinga.

With just over three weeks before the start of the Rainbow Cup, he would be managed, said coach Mziwakhe Nkosi.

“We were a little bit cautious with Elton. It seems he rolled his ankle at some stage, at a breakdown or a collision,” said Nkosi, who guided the Lions through the warm-up campaign.

“We thought it was better to bring him off and it gave Fred a longer opportunity to have a go.”

Nkosi said the medical staff would have a look and they would have a clearer picture in the next couple of days.

There was also some concern over prop Carlu Sadie after he was replaced after half-time, but Nkosi said it was just a precautionary measure ahead of the bigger matches that lay ahead.

“Carlu was just suffering from a bit of cramping, so we decided to take him off,” said Nkosi.

Nkosi was obviously not very impressed with their 44-12 defeat after they were found wanting on defence and lacked the ability to create the kind of energy that could pose a challenge to the experienced Stormers outfit.

“It was a pretty disappointing performance and we lacked urgency, and even though it was a warm-up game we still put on a Lions jersey,” he said.

“We were the architects of our own demise and we gave the Stormers three turnover tries.”

“As good as our handling was the previous week, it was as poor over the weekend,” Nkosi said.

“For a team that prides itself on the ability to attack it was pretty awful.”

Aside from their latest result, however, Nkosi felt they could look back on the warm-up series as fruitful as they managed to make strides in several departments.

“As a team we set out to tick a couple of boxes and give exposure to our youngsters, and in our opinion we have a couple of exciting youngsters,” he said.

Though they made a host of changes for the game, Nkosi said they couldn’t use their lack of energy on defence as an excuse as the entire squad trained together.

“However, we got a couple of good wins, like against the Pumas who are a really good side, and the Sharks.

“So in general we are not entirely unhappy with the progress that has been made in the Preparation Series.”