This is how we rated the players in the first of three Tests to be played between the teams at the Cape Town Stadium. 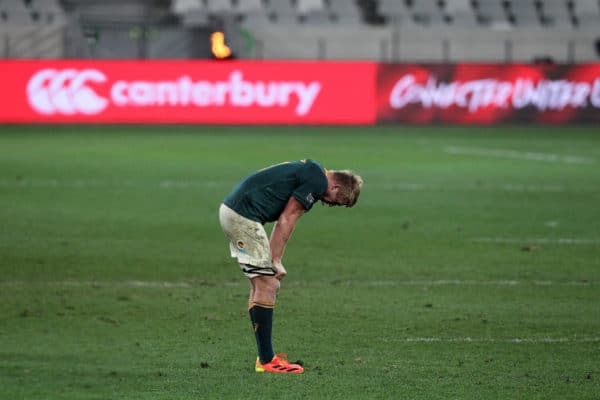 Pieter Steph du Toit of the Springboks hangs his head in disapointment after losing the first Test to the British and Irish Lions. Picture: EJ Langner/Gallo Images

The British and Irish Lions beat the Springboks 22-17 in the first Test of three at the Cape Town Stadium on Saturday.

This is how The Citizen rated the Bok players, out of 10.

Willie le Roux 7: He was generally good under the high ball, made a few decent runs out of defence, and pulled off an important tackle on Robbie Henshaw who looked headed for the tryline. Left the field in the 65th minute.

Cheslin Kolbe 5: Had almost no attacking opportunities and was found wanting under the high ball after taking a good up-and-under early on. A game he’ll want to put behind him.

Lukhanyo Am 6: Made a big hit early on against Elliot Daly and marshalled the defence well in the first half, but went missing in the second spell.

Damian de Allende 7: Still a real powerhouse at No 12, he made several good carries over the gainline and also put in a number of big tackles. A decent outing.

Makazole Mapimpi 6: Like Kolbe, he never got any proper opportunities; the one he did get he did well to kick the ball ahead, and gather it later on, which led to Faf de Klerk’s try. Knocked on a few high balls.

Handre Pollard 6: The flyhalf had a superb first half; he took several high balls out of the air, kicked all four his goals and ran strongly at the Lions. In the second half, he missed a few kicks, which proved crucial, and lost his way.

Faf de Klerk 6: Put in a few good tackles and scored a try after some good support play, while his over-the-top kicks into space were very decent in the first half. Left the action after an average second half in the 73rd minute.

Kwagga Smith 6: Secured several restarts, was busy at the breakdowns, and made a few good tackles. Gave away a 50/50 penalty and turn-over; left the action after 63 minutes. Decent shift.

Pieter-Steph du Toit 7: Worked tirelessly as always, cleaned hard, made his tackles, but gave away a few penalties as well.

Siya Kolisi 6: The skipper started slowly, but made a good break from a maul, which seemed to fire him up, and was busy in defence. Solid after time out of game.

Franco Mostert 5: The generally busy lock hit a few rucks and pulled off some tackles, but far off his best; was ssubbed after 63 minutes.

Eben Etzebeth 6: Was the banker man in the lineouts, busy in the rucks and mauls, stopping one on his own, and solid defensively. He, however, gave away a few penalties, one for a high shot that resulted in Luke Cowan-Dickie’s try.

Trevor Nyakane 7: Was solid in the scrums, cleaned well, tackled hard and even won a breakdown penalty. Excellent outing. Was replaced at half-time.

Bongi Mbonambi 7: Found his jumpers in the lineouts, clean strongly, and did his bit in defence. Replaced at half-time.

Ox Nche 7: The rookie loose-head enjoyed a fabulous 40 minutes before being replaced; he carried several times over the gainline and scrummed vey well.

Malcolm Marx 4: Was solid enough in the scrums and throwing in, but made little impact in the second half.

Steven Kitshoff 4: Didn’t make any difference coming on at half-time, even though he was solid at scrum-time.

Frans Malherbe 4: He came on after the interval and packed down at a few scrums, but never made a telling contribution.

Lood de Jager, Rynhardt Elstadt, Herschel Jantjies, Elton Jantjies, Damian Willemse: All came on after the 63rd minute and deemed to not be on the field long enough to be rated.

Nienaber: 'French camp will help get SA-based Boks up to speed'
11 hours ago
11 hours ago

Nienaber: 'French camp will help get SA-based Boks up to speed'
11 hours ago
11 hours ago