The Lions captain said he was rather focusing on the second Test, and not the video where the SA rugby boss points out refereeing issues. 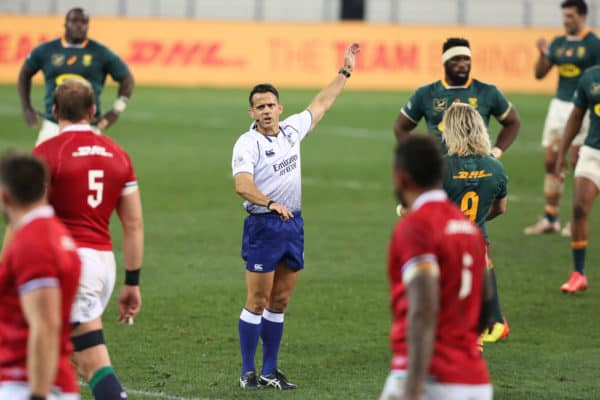 British and Irish Lions captain Alun Wyn Jones reacted on Thursday to criticism from South Africa director of rugby Rassie Erasmus of the first Test refereeing by saying “match officials have the hardest job in rugby”.

He spoke in an online news conference a few hours after Rugby World Cup-winning coach Erasmus questioned in a 62-minute video post many decisions made by Australian Nic Berry last Saturday in Cape Town.

Wales lock Jones said he had not watched the video and only “heard a little bit about it” as his focus was on the build-up to the second Test this Saturday after the Lions won the first 22-17 last weekend.

Another victory over the world champions would give the Lions an unassailable 2-0 lead in the three-match series, which concludes on August 7.

South Africa had two tries disallowed last Saturday — one for a marginal offside and the other for an obvious knock-on.

The Springboks also believed Hamish Watson should have been shown at least a yellow card for a dangerous ‘spear’ tackle.

But rather than get dragged into a war of words with Erasmus, Jones explained the difficulties faced by referees, their assistants and television match officials (TMO).

“The game has changed and I think it does get difficult for players the way the speed of the game is going,” said the lock and most capped player in the world with 158 for Wales and the Lions.

“I think match officials have the hardest job in rugby. They obviously have assistance and you have a TMO and I believe, more than ever, decisions are being focused on.

“I think they have always been scrutinised, but it is probably in vogue at the moment and obviously it has been highlighted by some decisions last weekend.”

Among the allegations made by Erasmus in his video was that Springboks captain Siya Kolisi had been shown less respect than Jones by Berry.

“It is probably a question for the officials,” said Jones, who made a remarkable recovery from an eve-of-tour shoulder injury to join the camp and reclaim the captaincy from scrum-half Conor Murray.

“It did not feel as if we had any advantage because a lot of the time I was standing next to Siya when we were speaking to the referees. That is an outside perception that I probably cannot comment on.”

Jones would not be drawn on whether the video would put added pressure this Saturday on New Zealand referee Ben O’Keeffe, assistants Mathieu Raynal from France and Berry and South African TMO Marius Jonker.

Jones said the Lions were concentrating on trying to clinch the series rather than discussing refereeing decisions.

“By selecting a 6-2 bench, the Springboks are probably going all out to win more set-piece possession than in the first Test.

“Last Saturday, we were disappointed with the way we started at scrum time. I felt we were under pressure, but our management improved drastically in the second half.

“We did well to turn the scoreboard around and we just want to make sure that we do not give ourselves too much of an early deficit this Saturday.”