Springboks hit back in style to square series against Lions

The Springboks went into the game desperate to level the series after going down 22-17 in the first Test. 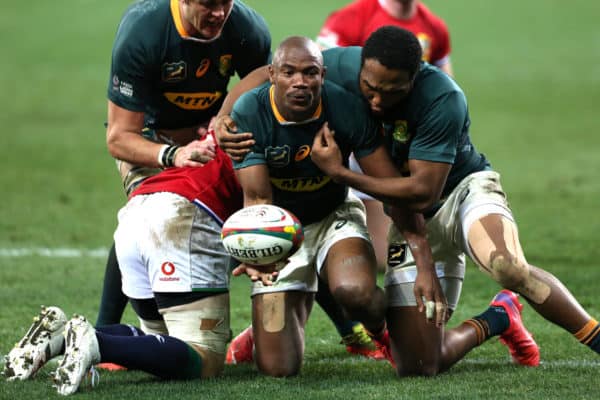 Springbok wing Makazole Mapimpi scores his team's first try in the second Test against the British and Irish Lions at the Cape Town Stadium on Saturday. Picture: EJ Langner/Gallo Images

With their bench firing and World Cup stars Makazole Mapimpi and Lukhanyo Am scoring tries the Springboks hit back to down the British and Irish Lions 27-9 in the second Test at the Cape Town Stadium on Saturday and square the series at 1-1.

It was a a full-blooded Test with plenty of niggle but also some quality rugby by the Springboks, who were out-played in the first Test at the same venue the previous week.

The series will now be decided in the third Test in a row at the same Cape Town venue next Saturday.

An even first half, where there was little to get excited about, turned into the Bok show in the second period, with the hosts scoring the only points. The Lions never came close to putting points on the board in the second half.

After a week when the SA Rugby director Rassie Erasmus released a video criticising first Test referee Nic Berry, New Zealand’s Ben O’Keeffe handled this Test excellently. His communication with all the players as well as his assistants was clear and to the point, and for the most part, it looked like he and the other officials, including TMO Marius Jonker, got all the tight calls right.

And there were a number of tight calls.

In a tense, on-the-edge first half, that lasted over 60 minutes, both the Boks and Lions lost men to the sin-bin. Duhan van der Merwe was carded for a tackle in the air on Cheslin Kolbe and not long after that the Bok winger himself was sin-binned for taking out Lions No 9 Conor Murray in the air.

There were other incidents as well, but none that warranted more than a penalty.

After early penalties by Dan Biggar (two) and Handre Pollard, the Boks suffered a big setback in the 22nd minute when Pieter-Steph du Toit left the field with an injury, to be replaced by Kwagga Smith.

A second Pollard penalty on the 30 minute mark made it 6-all and a while later the Lions came closest to scoring a try when Robbie Henshaw lost the ball over the tryline, Bok skipper Siya Kolisi doing well to dislodge the ball.

A Biggar penalty made it 9-6 to the visitors at the break but the Boks edged ahead soon after the restart when Makazole Mapimpi scored the game’s first try. The winger timed his run perfectly to latch onto a cross-field kick by Pollard and charge in for the five-pointer.

A number of personnel changes by the Boks 15 minutes into the second half seemed to boost the home team and not long after that one of those replacements, Lood de Jager, took a lineout ball and an excellently executed driving maul led to Lukhanyo Am scoring the Boks’ second try. It came after the maul broke up and Faf de Klerk put through a kick into space and Am beat the defenders to the ball.

Pollard then stepped up to slot a third and fourth penalty to give the Boks a 24-9 lead in the final 10 minutes of play.

The Boks remained very much in charge, with Pollard keeping his team in Lions territory and the visitors desperate to find a way into Bok territory to give themselves a chance to wrap up the series. It didn’t happen.