It was an incident-packed second Test, with several players waiting to hear if any further action will be taken against them. 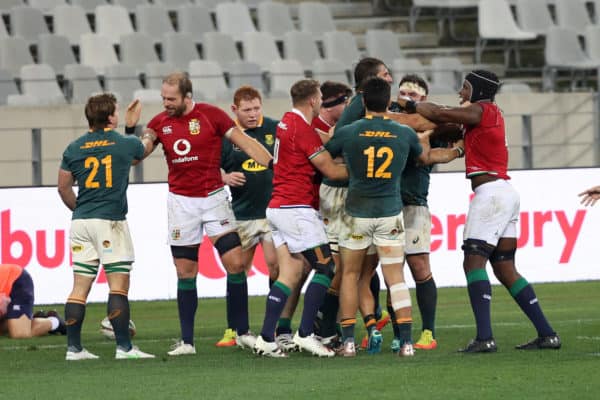 The Springboks and British and Irish Lions were involved in various scuffles during the second Test in Cape Town on Saturday. Picture: EJ Langner/Gallo Images

These two major incidents played out during Saturday’s second Test between the Boks and Lions at the Cape Town Satdium, won 27-9 by the home team.

Following the Lions’ 22-17 win in the first Test, at the same venue, the series will be decided in the third game, also at the Cape Town Stadium this coming weekend.

The second Test was another incident-packed game, deservedly won by the Boks who scored two tries and kept the Lions out in the second half, and footage on social media after the game of Hogg allegedly biting Le Roux in a scuffle has generated plenty of talk and debate.

Hogg on Sunday denied biting the Bok fullback. In what appears to be an official statement by the Lions, Hogg says: “Following speculation that has surfaced online, I would like to categorically deny any foul play in last night’s game.

“I would never bite an opponent and I am annoyed and upset by this unsubstantiated accusation.

“I’ve always been proud of playing rugby in the spirit of the game.”

Many felt the hit was deserving of a red card, but Bok boss Nienaber said he thought a yellow was the right call.

“I thought it was the right call. There is a process that gets followed in these cases … if this happens, you look at that, and, if that happens you look at that. I thought they went through the process very well.”

There are other incidents that have caused discussion.

By midday Sunday, no players had been cited for foul play.