"Defence is going to be very important and who can manage the game best.” 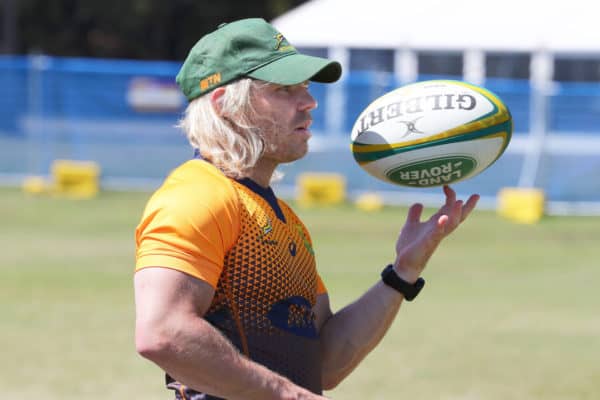 Faf de Klerk is expecting the Springboks to be tested defensively by the Wallabies in their Test on Saturday. Picture: Tertius Pickard/Gallo Images

Faf de Klerk would be in the conversation when it comes to a World XV but the Springbok scrumhalf certainly rates the credentials of the Australian number nines that he will be up against in their Rugby Championship Test on the Gold Coast on Sunday.

Tate McDermott is the starting scrumhalf and comes from a Sevens background, so he is a lively ball-runner who definitely adds another dimension to the Wallabies attack. Reserve No 9 Nic White is more of a kicker, but also knows exactly where the tryline is, as well as being a deft off-loader in the close channels. He is also quite physical and combative.

“Tate McDermott is an exciting youngster and he will definitely threaten us around the rucks, plus Nic White is there as back-up. So it’s going to be a massive challenge for us on defence,” said De Klerk this week.

“The Wallabies are going to try and run us off our feet, so it’s going to be a huge challenge defensively.

“If you look at their recent scores, they haven’t been so good. But the way they have played has shown that if you switch off against them, then you can quickly be 14 or 21 points down.

“If we’re not mentally right then we’re going to come badly second. So we’re under no impression that it’s going to be easy. Defence is going to be very important and who can manage the game best.”

Meanwhile, former Springbok coach Jake White, now director of rugby at the high-flying Bulls, has said playing in front of a hostile crowd is going to be an obvious hurdle for the tourists to overcome.

Rugby in South Africa has not had spectators since the arrival of Covid 18 months ago.

“The one significant thing that is going to be completely different in Australia is that there’s going to be a crowd,” White said.

“Our guys would have forgotten what that’s like. When we got to Treviso for the Rainbow Cup final, having the home crowd in was incredibly different to what we were used to because we hadn’t done it for so long.”