“If it’s going to be a dogfight, finals rugby, whatever; we must just play at our best," said the Bulls boss. 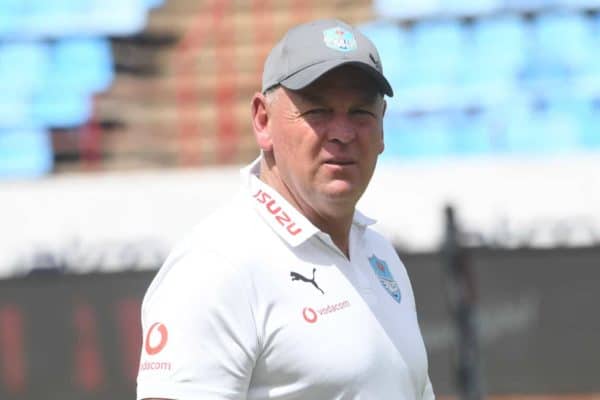 Bulls boss Jake White is hoping to start fast and get ahead quickly against the Sharks in the 2021 Currie Cup final on Saturday. Picture: Lee Warren/Gallo Images

Neither the Bulls nor the Sharks are expecting a gentle introduction into the Currie Cup final at Loftus Versfeld on Saturday, with the defending champions looking to settle the outcome early on, while the visitors are aiming to exert consistent pressure for the whole game.

In the semi-finals last weekend, the Bulls blew Western Province away in the opening 16 minutes by racing into a 24-5 lead; the Sharks had to go the distance in seeing off Griquas 28-24.

“We basically beat Western Province in the first quarter and I expect to start the same way as we did last week, why not? We’ve only made two changes to the team and the Sharks lost two weeks ago at home to the same Western Province team that was on the ropes against us,” fired-up Bulls coach Jake White said on Friday.

“Last year’s extra-time final is irrelevant, all the Springboks played and now the Sharks are missing seven guys in Australia.

“If it’s going to be a dogfight, finals rugby, whatever; we must just play at our best.

“Western Province were desperate when they beat the Sharks and so if we are more desperate than them then we will be okay. If you look at the trophy and the history, if it’s just another game for us then we’ve lost perspective.

“We have a massive opportunity to be the first team to win the Currie Cup twice in one year.”

The Sharks are expecting to have to weather an early storm and will then be hoping to outlast the Bulls.

“Both teams are going to have to handle the intensity. The Bulls were sublime in the first 20 minutes against Western Province and that will pose a challenge,” Sharks coach Sean Everitt said.

“There will be nerves and the team that settles down first will make a better start, which is really important in a game of this magnitude. You can’t underestimate the influence of scoreboard pressure.

“So we can’t afford to give away early penalties. We want a consistent performance and it has built character for us to play under pressure to qualify for the final, that helps.

“We have also played quite a few games at altitude and coped very well, we don’t see it as a factor and two weeks ago we beat the Lions by fifty points. We will play what’s in front of us and a full defensive line means there’s space behind.”

Both teams have had halfback issues.

Johan Goosen, who was instrumental in the Bulls’ semi-final win with his skill and vision, has tested positive for Covid and has been replaced at flyhalf by Chris Smith, who came off the bench and kicked the 79th-minute penalty to level the scores in last season’s final between the same two teams at the same venue. There is no specialist flyhalf cover on the bench with wing Ruan Combrinck or rookie utility back David Coetzer bracketed among the reserves.

The Sharks have SA A scrumhalf Sanele Nohamba starting, but with Jaden Hendrikse, Grant Williams and Cameron Wright all injured, U20 player Lucky Dlepu, uncapped at senior level, is on the bench.

REVEALED: Why Duane Vermeulen decided to leave the Bulls
3 days ago
3 days ago

REVEALED: Why Duane Vermeulen decided to leave the Bulls
3 days ago
3 days ago