Kwagga to get another crack at All Blacks; Van Staden out with injury

The South Africans will be looking to make up for losing the first Test against the New Zealanders late in the game. 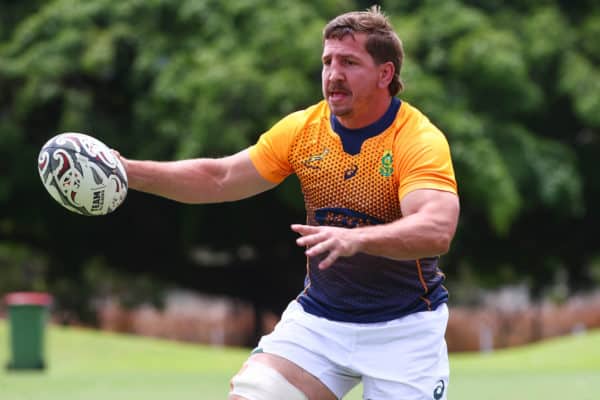 Flanker Kwagga Smith, after his good outing in Townsville, is set to feature again against the All Blacks, in the Gold Coast this weekend. Picture: Gallo Images

The Springboks are set to back Kwagga Smith once again when they meet the All Blacks in the final match of this year’s Rugby Championship on the Gold Coast on Saturday.

This, after Smith’s outstanding performance last Saturday justified his selection in the starting XV, while Siya Kolisi led from the front in a wonderfully defiant performance that suggests the Springboks management will stay with the same balance among the loose forwards.

Smith came into the Bok loose-trio at the expense of Franco Mostert, who started on the side of the scrum in the two lost Tests against the Wallabies. The Boks lost the first Test against the All Blacks 19-17 last Saturday in Townsville, with Jordie Barrett slotting the last-gasp penalty with two minutes to go.

ALSO READ: Bok coach: Decision-making will have to be better in All Blacks rematch

The Boks though have a potential problem on the bench because replacement flank Marco van Staden, who made a real impact when he came on in Townsville, has suffered a shoulder injury.

The Bulls flanker did not train on Monday and must be considered doubtful for Saturday.

Jasper Wiese, who was left out of last week’s matchday 23 following the uncertainty around his availability because of a citing, is the obvious replacement, but he is a tighter loose forward than the pacy Van Staden.

“The players bring different strengths and we know Kwagga is fast over the field, he’s an explosive runner and he has a very high work-rate,” said Bok assistant Deon Davids on Monday. “Against New Zealand you need players than can give you that.

“Duane Vermeulen and Siya are both ball-carriers, lineout options and they play well in the wide channels. So it’s a combination that can deal well with our plan and what the opposition will bring.

“In terms of selection, we lost the game in the last minute but it’s a different situation if you win. We will be asking questions over what is necessary to get a good result on Saturday and in terms of what we are building towards.

“We are excited to get another chance to put it right and we are proud of the players because they implemented the plan very well, but we lost a nail-biting match.”