URC preview: Who the SA teams are up against in round four

The four South African teams will be keen to end the first phase of the competition on a high. 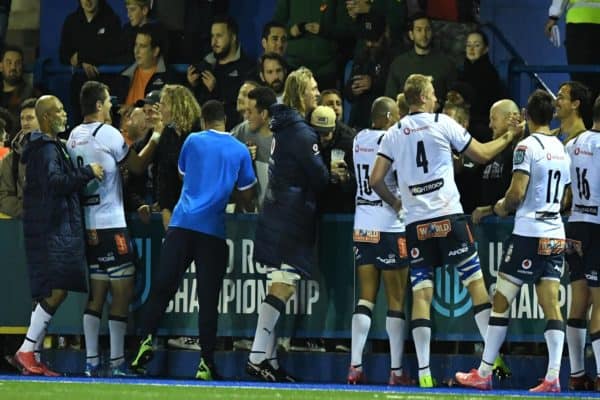 The Bulls players celebrate their win last weekend with the Sharks players, who turned up to watch them in action at the Cardiff Arms Park. Both will be looking for a second win on the road this weekend. Picture: Ben Evans/Gallo Images

Just three sides are still unbeaten in this season’s United Rugby Championship, and while South African teams finally found their feet in round three, they face tough challenges in round four of the competition as they end off the first phase of the competition.

With this in mind, this is what you can expect from the SA franchises’ opposition in round four this weekend.

Ulster  have started the competition with a bang, registering a perfect haul of 15 points from three games in their opening salvo and will go into the game as heavy favourites against a Lions team that was very unlucky against Glasgow Warriors last weekend.

Dan McFarland’s team is on a four-game winning streak since losing to Leinster in May and boast a good record against South African opposition, winning seven of their previous nine meetings.

Five players returned to training, giving Ulster a boost ahead of the fixture as they look to go the first month unbeaten. Kieran Treadwell, Rob Lyttle, Eric O’Sullivan, Robert Baloucoune and David O’Connor rejoined their team-mates and may well force their way into action this weekend.

Ulster are also a side that prides themselves on their set-pieces, and have a 93% success rate at scrums, something they will test the impressive Lions scrum with this weekend.

In all, it seems a tough task for the Lions as the Belfast weather could also play its part, and the former club of Marcell Coetzee, Louis Ludick, Ruan Pienaar and so many more is on a high.

The Dragons win on the road in Galway came as quite a shock to many in the URC as they recorded their first win at the Sportsground since 2004, and made a mockery of Connacht’s form in downing the Bulls a week before.

The side who had narrowly lost their opening two fixtures before finding their feet will be on a high and looking to build on the big win as the Stormers head to Rodney Parade.

The Dragons are a combination of the old Newport and Gwent sides and have traditionally struggled in PRO14, and lost their last four home games on this ground.

But they almost shocked PRO14 champions Leinster a few weeks back, going down 7-6 in their last outing on the ground.

Last weekend’s result: Drew 20-all with the Stormers

An intriguing game awaits in Edinburgh as the Stormers were unlucky to go away with only a draw last weekend. While Jaco van der Walt was the key man for Edinburgh as he beat 11 Stormers defenders (in his attack stats) last weekend, the Cape side eventually tightened up and forced the home side to change tactics, reverting to an aerial battle.

Before last weekend’s game the Scottish club had won all four games against South African opposition, and will look to their South African players – Boan Venter, Pierre Schoeman and Van der Walt – to put them on the path to a victory.

Edinburgh also have two players currently among a group tied for the top try scorer in the URC with Darcy Graham and Ben Vellacott both crossing the tryline three times in the opening three weeks.

The Sharks had a front row seat in watching the Bulls second half comeback against Cardiff but will be wary of the threat they pose, particularly at the breakdown. They made the short trip down the M4 after their win over the Ospreys the night before in Swansea and were big supporters of their Pretoria rivals on the night.

Cardiff will want to avoid losing three in a row in the competition for the first time since last November as the Bulls ended their four-game winning run at the Arms Park.

Cardiff wing Owen Lane is among the competition’s leading try scorers with three while the side has lost their British and Irish Lions talisman Josh Navidi, who went off against the Bulls with a shoulder injury.