Amajita go down 4-0 to Brazil

The South African Under-20 Men’s National Team, Amajita, went down 4-0 to Brazil on Wednesday evening at Saint Georges Park in England. 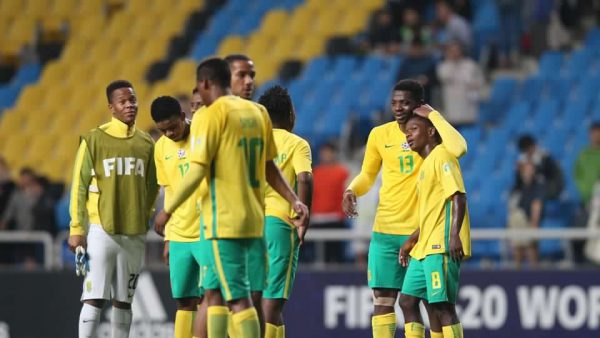 This was the first of two matches of the Tri-Nations tournament that also involves the host nation.

After a brilliant first half in which they held their own against their much-fancied opponents, Amajita fell apart in the second stanza.

The move did not pay dividends as the team lost shape – conceding their first goal three minutes later through Vitinho.

The striker grabbed his second of the night in the 66th minute to increase his side’s lead.

In an attempt to try and pull one back, the South Africans were caught napping at the back, and Rodrigo Nestor netted Brazil’s third in the 69th minute.

Foster came close to reducing the deficit a short while later after he beat the opposition defence with some skilful play but his curler went wide.

Brazil’s second half substitute, Brenner could have easily made it 4-0 when managed to beat the offside trap but was in a hurry to take a shot with the goalkeeper at his mercy, and he shot off target.

The fourth goal did come, however, in the 89th minute through Yuri Alberto, and the South Americans romped home 4-0 victors.

Prior to the goal, South Africa made their fifth substitution, replacing an injured Dean Solomons with Sibusiso Shabane.

It was a good exercise for the boys, some of whom were making a first appearance at this level.

Amajita next face England on Monday before returning home on Wednesday morning.