Moroccan side Wydad Casablanca are in the capital city to face Mamelodi Sundowns for the fifth time in the Caf Champions League and are in search of their first win in Pretoria. 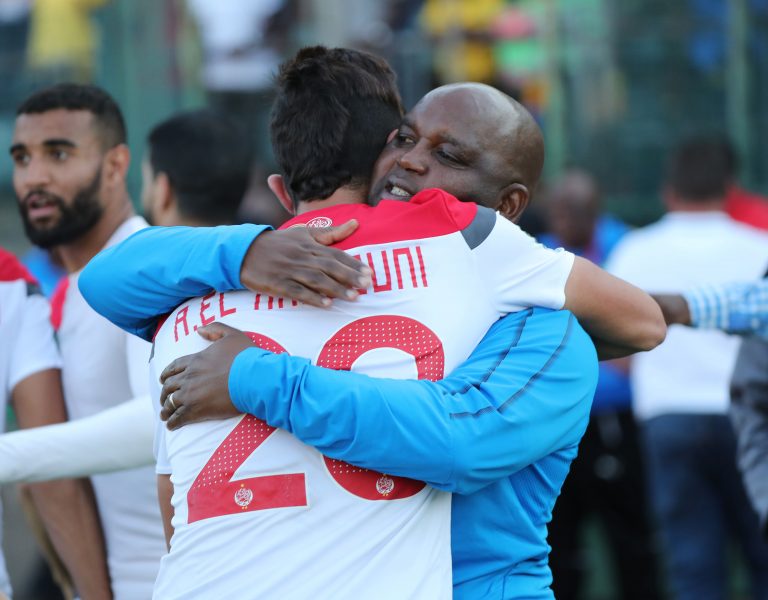 Ayman El Hassouni of Wydad embraced by Pitso Mosimane, coach of Sundowns after final whistle as Sundowns eliminated in semiffinal stage during the 2018/19 CAF Champions League football match between Sundowns and Wydad Casablanca at Lucas Moripe Stadium, Pretoria on 04 May 2019 ©Gavin Barker/BackpagePix

Downs and the Moroccan giants will lock horns in what is expected to be a fierce battle for the top spot of Group C where Downs currently lead by 11 points while Wydad are hot on their heels with nine points.

Wydad coach, Sébastien Desabre, who recently rejoined the club for his second spell, said it is possible to beat Masandawana at home and overtake them to the summit of the group.

“I think it is a good team and I think we can find some weaknesses from this team. Sundowns are a true collective and the coach has been here for a long time with the team and the best thing is that they do have individual players. I think if all my players give their maximum performance in the game and play a good game, it will be a good chance to beat this team,” said Desabre.

“We respect the team, they are a good team but I do think it is possible to get a win away. We need three points to finish first and we will play an offensive game and I think tomorrow will be an open game and I hope we can score many goals. We have to score and it is important to take some risks for that,” he added.

The weatherman predicts that Saturday will be scotching at 33 degrees and that might cause problems for the North Africans who are accustomed to cooler conditions. However, Desabre says they team arrived on Tuesday to give themselves time to acclimatize to the conditions.

“It is a thing to manage for my team and many of my players have played in Africa before and we are able to able these aspects. But for us it is important to keep focus on our game project. We know the opponents very well.”