Eagles are now second and six points behind pace setters Stellenbosch FC who are on 41 after 20 games. 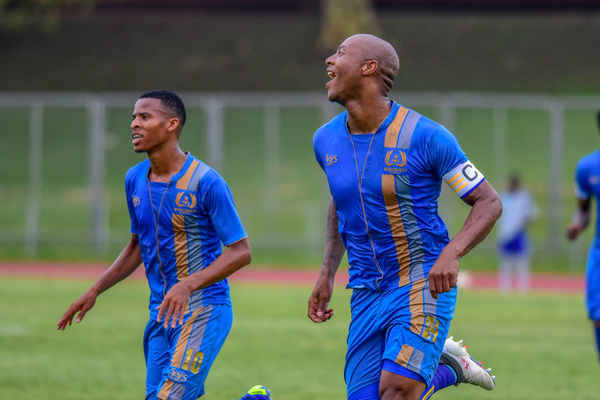 The race for promotion in the National First Division is entering its final stages with 10 games left to the end of the season and Royal Eagles made a statement of intent when they demolished former Absa Premiership campaigners, University of Pretoria 5-0 at Chatsworth Stadium on Saturday afternoon.

Eagles are now second and six points behind pace setters Stellenbosch FC who are on 41 after 20 games. The Pietermaritzburg based side – who recently hired actor and fitness guru Andile Mxakaza aka Fezile on local soapie Isibaya – as fitness coach and Sazi Ngubane and Bafana Nhlapo as co-coaches are now unbeaten in four matches and look credible challengers to the NFD title which comes with automatic promotion to the top flight.

On Saturday they went rampant and ran Ziphozonke Dlangalala’s AmaTuks side ragged with Andile Fikizolo scoring twice and Diego Brown, Philani Cele and Dilon Solomons adding their names to the score sheet as well.

Third placed Ajax Cape Town didn’t do their chances any good when they were held to a 4-4 draw at home by Tshakhuma Tsha Madzivhandila on Sunday afternoon.

New signing Thomas Verhaar continued his scoring run contributing on of the goals for the Urban Warriors. Prince Nxumalo scored a brace and Thendo Mekumela added his name as well.

For Tshakhuma it was Nhlanhla Mgaga who was in form netting a hatrick with Onyedikachi Ononogbu scoring the other. Tshakhuma – who were top of the standings at some stage – now remain seventh on the long and an incredible 13 points behind Stellenbosch.

Fourth placed Mbombela United meanwhile could not make any headway as they were held to a goalless draw at home by Stellenbosch. The result was however good for the home side who trail the log leaders by eight points.

Jomos Cosmos’ chances of staging a late run for the promotion places were dealt a blow yet again when they suffered a 2-1 defeat to strugglers Ubuntu Cape Town. Ezenkosi are now 18 points below the top spot after the latest defeat. Waseem Isaacs scordd twice for the home side and Zephaniah Mbokoma tried to get Ezenkosi back but his goal was not enough. For Ubuntu the win boosted their survival chances as they are now 14th and two points above bottom placed Real Kings who were beaten 1-0 by Tim Sukazi’s TS Sporting on Saturday afternoon.

Former Chippa United midfielder Sizwe Mdlinzo was the hero as TS Sporting registered their second win of 2019. The Rockets have stabilised and they don’t have relegation worries at the moment. It is a different story however for the Magic Boys who remain bottom of the standings.

Mazwi Ndwandwe looked to have stolen the full points for the Cane Cutters when he opened the scoring but Khethukuthula Zwane was on hand to stop him and ensure that they at least get one each as he scored the equaliser. Siyavutha are still second from bottom. The Cane Cutters are fifth on the standings and in with a chance of springing a late charge for the promotion places.

The Natal Rich Boys continued their steady rise up the standings when they beat Cape Umoya United 2-1, with Paseka Sekese and Michael Gumede scoring for the home side. Roscoe Pietersen equalised after Sekese’s opener but Gumede was on hand to net the winner.

Maccabi continued their good record away as they secured an important point against Abantu Bemthetho. Edmore Chirambandare opened the scoring before Riggobert Nyundu equalised. Decide Chauke thought he had decided the result but Nathaniel Tladi came with an equaliser that ensured the share of the spoils.