Petersen and Sekgota help Amakhosi to a shootout win. 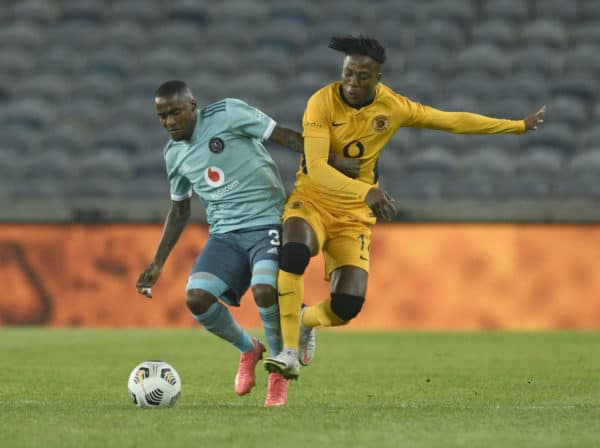 Kgaogelo Sekgota of Kaizer Chiefs is challenged by Thembinkosi Lorch of Orlando Pirates during the 2021 Carling Black Label Cup on Sunday. Sekgota had a good game and netted the winning penalty. Pic ture: Sydney Mahlangu/BackapagePix.

Kaizer Chiefs are the Carling Black Label Cup champions for 2021 after beating Orlando Pirates 4-3 on penalties, following a goalless draw at Orlando Stadium on Sunday.

Brandon Petersen, Chiefs’ new goalkeeper, came off the bench to make saves from Ntsikelelo Nyauza and Wayde Jooste in the shootout, while Kgaogelo Sekgota, another new recruit for Amakhosi, slotted in the winning spot kick.

Both teams showed a fighting spirit and a will to win from the first whistle. But ring rust showed as they couldn’t utilise the chances they created.

Pirates had the better chances and came close to scoring but Itumeleng Khune did well to keep parity.

Sekgota came close to opening the scoring with what was technically his first touch in the 55th minute. He swung in a free kickbut Richard Ofori saved it.

Another of the Amakhosi substitutes Cole Alexander also almost got onto the score sheet immediately. He found himself with the ball inside the Buccaneers box, after a Khama Billiat knock down, but his shot was blocked by Nyauza and it went over.

Chiefs became the more offensive side after ringing the changes and pressing high up. the pitch They had a great chance to take the lead in the 74th minute when referee Thandi Ndzandzeka awarded them a penalty.

This was after Nyauza handled the ball inside the box. Trusted penalty taker, Daniel Cardoso stepped up to take the spot kick. But Ofori managed to dive at full stretch to his left and punched the ball away to safety.

The game ended goalless after 90 minutes and it was down to penalties to decide the winner. That is where Chiefs won it.