'I have only heard good things about the club,' said Singh, after signing a four-year deal. 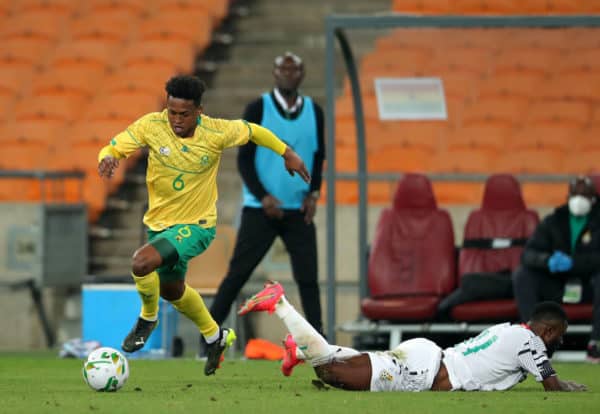 Luther Singh (left) has been snapped up by FC Copenhagen. Picture: Samuel Shivambu/BackpagePix.

Luther Singh received a welcome message from former FC Copenhagen and Bafana Bafana star Sibusiso Zuma, as the current Bafana international was officially unveiled by the Danish giants on Wednesday.

The 24 year-old has signed a four year contract on joining from Portuguese side Sporting Braga.

Zuma was a star for FC Copenhagen between 2000 and 2005, remembered especially for this staggering goal in 2001.

And in a lovely touch, the club put out a video on Wednesday of Zuma welcoming his fellow countryman to Copenhagen.

Singh will wear the number 7 jersey at FC Copenhagen and told the club’s official website:

“FCK has a fantastic reputation in Europe and not least in South Africa, where we all know the story of Zuma, but also Elrio Van Heerden, who did great here,” said Singh.

“I have only heard good things about the club, and even though I had opportunities in Portugal, England and other leagues, F.C. Copenhagen is the right choice for me.”

“I have been to Scandinavia before, so I know the mentality, the climate and the physical style of play that can sometimes characterise the matches. I humbly approach the task and know that it takes hard work to break through here, but I know that I will have skilled teammates and coaches around me, so I’m just looking forward to getting started.”

“We need speed and ability one-on-one in the way we play, and here Luther fits in well,” said Thorup.

“He can put people off with his speed and dribbles, and he also has the skills to be part of the relational part of the game and stands for a lot of assists and involvement in chances for his teammates.”

“Now we look forward to getting him on the training ground and working with him, and then we have to see when he is ready for battle.”