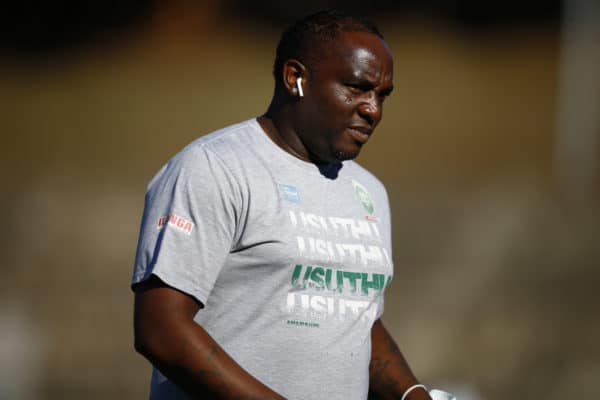 Benni McCarthy's AmaZulu are said to be looking to bring an overseas-based striker to South Africa. (Steve Haag/BackpagePix)

AmaZulu are said to be close to getting their man as the transfer window draws to a close on Tuesday.

Usuthu, through their coach Benni McCarthy, have made it clear that they need a more lethal striker if they are to make anything of their current season and of the upcoming Caf Champions League campaign.

“They have found their man and are now working around the clock to make sure he gets here on time so he can be registered. “I do not have the full details on things like where he is from but he is currently in Europe,” said a source.

They are complemented by youngsters Lindokuhle Zungu and Bayanda Shangase who are in the team more to learn than to take up full responsibility for goals.

In their first three games, Usuthu are winless and have scored just once, in the 2-1 defeat to Cape Town City in the MTN8 quarterfinals.

Meanwhile, as previously reported, McCarthy belives Percy Tau’s move from the English Premier League (EPL) to Al Ahly is a step backwards, and that it does not help the cause of future South Africans who want to play in the top leagues in Europe.

Tau was unveiled this week as an Ahly player, where he will reunite with his former head coach at Mamelodi Sundowns, leaving Brighton despite finally getting a work permit to play in the EPL in January.

The 27 year-old’s game time was severely limited at Brighton, and prospects of that changing did not look good heading into the new campaign.

“I think at this point in time Percy Tau, and his peers around him probably thought it was the best option for him (to leave),” said McCarthy.