Five things we learned in the Premier League

Manchester City are locked with Chelsea and Liverpool on 20 points at the top of the Premier League after Riyad Mahrez missed a late penalty in a 0-0 draw at Anfield. 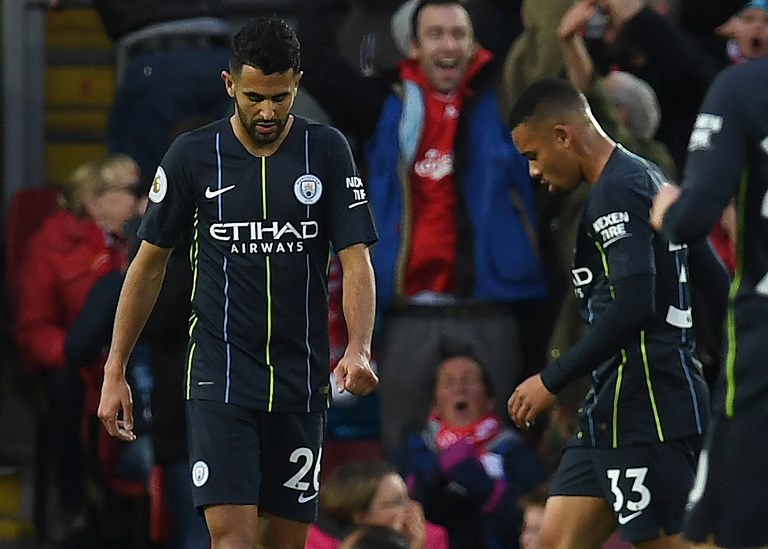 Chelsea brushed aside Southampton 3-0 while Arsenal hammered Fulham 5-1 to record their sixth Premier League victory on the bounce.

Elsewhere, Tottenham stayed in the title hunt with a 1-0 win at bottom club Cardiff while Manchester United stormed back from two goals down to beat Newcastle and give manager Jose Mourinho some breathing space.

AFP Sport looks at five things we learned from the Premier League this weekend:

The only new addition to the Manchester City squad that amassed a record 100 Premier League points last season had the chance to lay down an early marker that the champions remain the team to beat in the title race.

However, Riyad Mahrez blasted a late penalty well over the bar as City had to settle for a point in a 0-0 draw at Anfield and a share of the lead with Liverpool and Chelsea.

A wayward finish from City’s club-record £60 million ($79 million) signing summed up an afternoon to forget in attacking areas for both sides.

At the other end, Liverpool’s front three of Mohamed Salah, Roberto Firmino and Sadio Mane were also held scoreless for a fourth straight game.

As a result, Jurgen Klopp’s men have failed to win any of their past four matches in all competitions.

– Mata, from outcast to saviour? –

Juan Mata, peripheral to Mourinho’s plans since the start of the season, was instrumental in Manchester United’s dramatic fightback against Newcastle.

The Spaniard was left out of the starting line-up but brought on in the 19th minute in place of defender Eric Bailly with the home side already 2-0 down and Mourinho’s job on the line.

The 30-year-old does not possess the physical strength of Paul Pogba or Nemanja Matic but he has the tools to unlock defences and could be the creative force to get United ticking.

Alexandre Lacazette scored 17 times in his debut season with Arsenal but the French forward finished last term in danger of becoming an expensive flop.

Lacazette’s intermittent goal bursts could not mask the undeniable truth that his move from Lyon for a then club record fee was far from a success.

The successful January arrival of Pierre-Emerick Aubameyang had pushed Lacazette to the fringes in Arsene Wenger’s final season and when he started the current campaign on the bench under new boss Unai Emery, he might have feared for his future.

Yet Lacazette has responded superbly, displacing Aubameyang as Arsenal’s central striker and scoring twice in Sunday’s 5-1 rout of Fulham to make it five goals for the season. More importantly, his muscular, committed display shows he has finally adapted to the Premier League.

Chelsea midfielder Ross Barkley justified Gareth Southgate’s decision to call him up to the England squad, scoring his first goal for Chelsea against Southampton on Sunday.

Barkley has been in and out of the team under Maurizio Sarri but started on Sunday alongside Jorginho and N’Golo Kante.

The former Everton man, who missed out on the World Cup in Russia, set up Eden Hazard’s opening goal on Sunday and scored their second himself.

“Ross Barkley is playing well,” Hazard told Sky Sports. “He scored and made an assist. He is doing well and working hard on the training ground.”

An injury crisis, homeless due to an unfinished new stadium and headed for an early Champions League exit… it has not been the easiest start to the season for Tottenham Hotspur.

Yet in the Premier League, Spurs have so far largely overcome that mountain of difficulties to match their best-ever start under Mauricio Pochettino, with six wins from eight games.

Saturday’s scrappy 1-0 win over bottom of the table Cardiff will not live long in the memory, much like a 2-0 victory at Huddersfield the week before.

But Pochettino’s men are managing to grind out wins to keep themselves in the chasing pack while they await the return of a host of injured stars and the keys to their new White Hart Lane home.