Koeman was asked about the club's loss of identity after the draw against Granada on Monday. 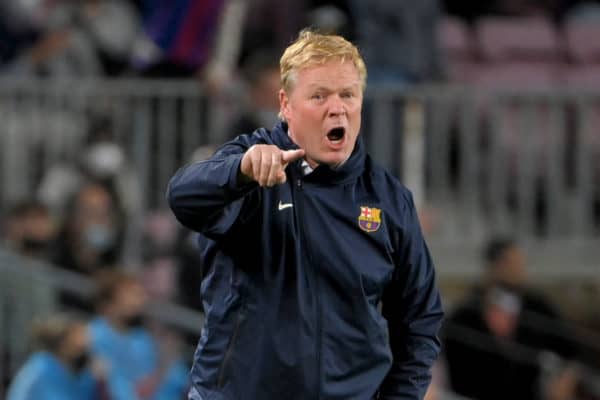 Barcelona’s under-pressure coach Ronald Koeman delivered a bizarre press conference on Wednesday as he read a pre-prepared statement before leaving without answering questions.

Koeman’s position is fragile, after Barca followed up a 3-0 defeat by Bayern Munich in the Champions League last week with a 1-1 draw at home to Granada in La Liga, with the team’s tactics and style coming under scrutiny.

In his press conference, Koeman sat down and was introduced by the Barca press officer, who said the Dutchman wanted to read a short statement.

Reading from a piece of paper, Koeman said: “Hello everyone. The club with me as coach is in a situation of rebuilding.

“The financial situation of the club is connected to the sporting activities and vice-versa. This means we as a team have to rebuild the team without being able to make any big financial investments. This needs time.

“The young talent today could be the next big world stars in just a few years. To rebuild this team, young players will be given opportunities like Xavi and Iniesta had in their day. But we must ask for patience.

“Achieving a high ranking in La Liga is a great success. In the Champions League we can’t hope for miracles. The defeat by Bayern Munich last week has to be analysed with that perspective.

“The process we’re in now with the staff and the team deserves unconditional support, in words and actions. I know the press recognises this process.

“It’s not the first time in Barcelona’s history this has happened. We count on your support in these difficult times.

“As staff and players, we are very happy with the great support of the fans, like we had in the match against Granada. Visca Barca, thanks to everyone.”

Several names, including Xavi Hernandez, Roberto Martinez and Antonio Conte, have been mentioned as possible successors to 58-year-old Koeman, whose relationship with club president Joan Laporta has been strained in recent weeks.

After the defeat at home to Bayern, Laporta posted a video addressed to Barcelona supporters in which he said: “I am as disappointed and upset as all of you are… Do not doubt we will resolve this situation.”

Koeman was asked about the club’s loss of identity after the draw against Granada on Monday.

His team had delivered 54 crosses and ended the game with central defenders Gerard Pique and Ronald Araujo playing up front.

“If you see the list of players, what do you do? Play tiki-taki? Tiki-taki when there are no spaces?” said Koeman.

“We did what we had to do. We tried to win another way. We don’t have players one-on-one or with speed. We’re talking… I’m not going to say more because it seems I have to argue about everything.”

Barcelona head to Cadiz on Thursday in La Liga, having won two and drawn two of their opening four league games.