Anderson ousted, Tsitsipas rolls on as storm threatens US Open

Meanwhile, defending women's champion Naomi Osaka advanced after a walkover in her second round match. 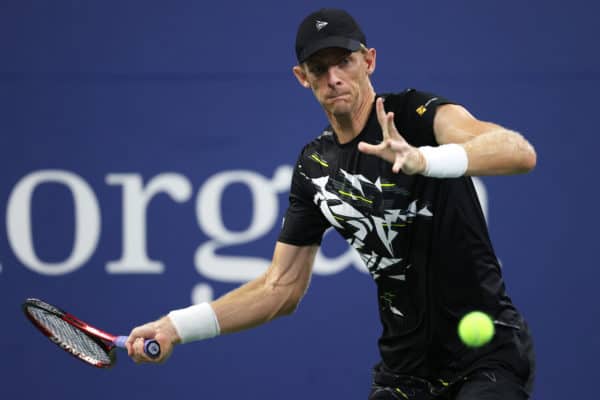 Kevin Anderson of South Africa returns the ball against Diego Schwartzman of Argentina during their second round match at the US Open on Wednesday. Schwartzman won the match in three sets. Picture: Al Bello/Getty Images

Stefanos Tsitsipas took another trademark long bathroom break then credited it for advancing to the third round of the US Open on Wednesday as a storm lashing New York forced the suspension of an indoor match.

The 23-year-old Greek third seed was booed after taking more than eight minutes between the third and fourth sets but dominated after his extended toilet trip to flush Frenchman Adrian Mannarino 6-3, 6-4, 6-7 (4/7), 6-0 at Arthur Ashe Stadium.

“I think taking a break and going to change — I was completely wet — I was refreshed,” Tsitsipas said when asked about the key to sweeping the final set in 30 minutes.

“I was much more able to deliver good tennis in the fourth set. I was able to stay resilient on each and every point.”

Tsitsipas, who matched his deepest US Open run, has been ridiculed by Andy Murray and Alexander Zverev for extended bathroom breaks seen as gamesmanship.

French Open runner-up Tsitsipas, who says he’s only following ATP rules that have no time limit on toilet breaks, fired a career-high 27 aces, five more than his previous best, in winning his ATP-best 50th match of the year.

“I just felt very loose on my serve,” Tsitsipas said. “My ball toss was very consistent. That helped me find a spot and have points off my serve.”

Remnants of deadly Hurricane Ida would shut down the covered court after twice interrupting the match, with the National Weather Service issuing a tornado and flash flood warnings for the area.

Anderson and Schwartzman resumed in Ashe after Tsitsipas’s victory, with the South American winning 7-6 (7/4), 6-3, 6-4.

Osaka reached the third round when 20-year-old Serbian qualifier Olga Danilovic withdrew due to illness.

“I have been feeling unwell these past few days dealing with a non-covid related viral ilness,” Danilovic posted on social media.

The 23-year-old Japanese third seed could could become the first repeat US Open winner since Serena Williams, absent with a torn hamstring, captured her third in a row in 2014.

Sloane Stephens, the 2017 US Open winner who could meet Osaka in the fourth round, beat 21st seed Coco Gauff 6-4, 6-2 in an all-American showdown.

“I’m really pleased with how I played,” Stephens said.

Medvedev, a winner last month in Toronto, also beat Koepfer on his way to the 2019 US Open final, which he lost to Rafael Nadal.

“Great level from me,” Medvedev said. “There were a few tight moments in the match and I managed to play them well. I’m happy to be through in less than two hours.”

She will next face two-time Australian Open champion and three-time US Open runner-up Azarenka, the 18th seed from Belarus who defeated Italy’s Jasmine Paolini 6-3, 7-6 (7/1).

“The next round is going to be exciting for both of us,” Azarenka said.

“It’s going to be a very difficult match. She always plays great here,” Muguruza said. “She’s one of the best players out there.”

“I feel better. I’m more confident,” Halep said. “Before the tournament, I was a little worried with injuries.”