In his recent State of the Nation speech, President Jacob Zuma said Pretoria might be the new home for Parliament, as the costs of keeping SA’s legislature in Cape Town is too high.

The government is looking to cut costs and wasteful expenditure, as part of its fiscal prudence journey.  “We believe that the matter requires the attention of Parliament soon,” he said.

The move would be fitting, given that the Pretoria-based Union Buildings form the official seat of the South African government and also houses the president’s office.

However the move, should it ever materialise, will be complex and costly. One analyst, who can’t be named, said it might cost R10 billion to build a new Parliament in Pretoria and bring about a saving of R500 million per year (based on past discussions). Talks about relocating Parliament date back to 1994.

Grindrod Asset Management chief investment officer Ian Anderson said the fact that government is considering the move has positive implications for Delta Property Fund and Octodec Investments. “Both of these companies stand to benefit from a larger government presence in Pretoria,” Anderson told Moneyweb.

In January, Delta Property and Octodec (among other SA-focused stocks) underperformed the market, delivering a negative capital return of 5.84% and 6.55% respectively, according to the latest figures from Cape-based Catalyst Fund Managers.  The FTSE/JSE SA Listed Property Index – a benchmark for the sector’s performance – also posted a negative capital return of 2.99% during the period.

SA’s more than R400 billion-worth listed property sector has been in the doldrums since December, as individual stocks that focus only the domestic market have seen a heavy sell-off.  But companies hedging their bets offshore are faring much better, as their rand hedge status insulates earnings from the weakness of the rand.  Read more here.

Since Zuma’s announcement about Parliament’s potential move, the share price of Delta Property and Octodec have rallied by 9.68% and 5.38% respectively. 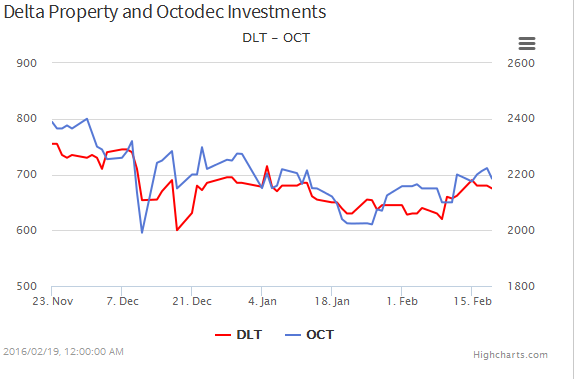 But Delta Property has cemented its relationship with government tenants over many years, and now enjoys long-term leases.

Delta Property, with a market capitalisation of R3.6 billion, is building scale. It recently entered into discussions with Redefine Properties to acquire its government-tenanted portfolio for R1.2 billion.  The portfolio consists of 13 office buildings that are largely leased to national and provincial government tenants. The properties are located in Johannesburg, Pretoria and KwaZulu-Natal. For years, Redefine has said that it does not have the skill to manage properties tenanted by the government and would look for a buyer to take up the buildings.

Octodec, with a market capitalisation of R5.6 billion, also has a large presence in Pretoria’s property market. Within the Tshwane CBD, Octodec owns a portfolio of office, retail and residential properties valued R4 billion. Its total property portfolio is valued at R11.6 billion.