Renewables can carry their Eskom weight

Eco-energy proving to be more than just a green badge for Eskom during peak hours. 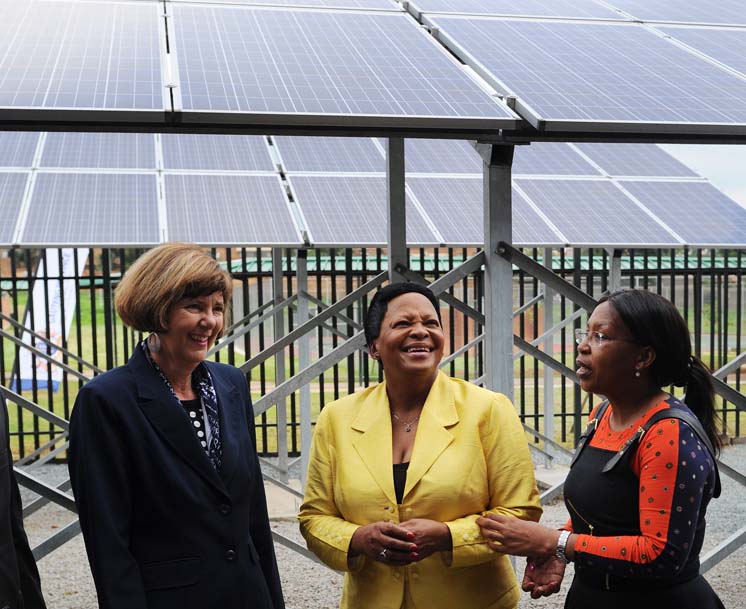 Gauteng Premier Nomvula Mokonyane (centre), pictured with MEC for education Barbara Creecy (left) and MEC for Infrastructure Qedani Mahlangu take a tour of the newly completed Northriding Secondary School in Johannesburg, 13 March 2014. The solar-powered school is one of two - the other being the Noordwyk Secondary School - not dependent on the national grid for its power supply. Each has been fitted with 55m x 15m solar farms, capable of independently powering the schools during sunny days, reducing energy bills substantially. The system allows the schools to automatically switch over to traditional supply at night and during cloudy days. Rain water harvesting systems were also installed at the schools, allowing for sustainable and free irrigation. The schools, built last year, began classes at the start of the school year. Picture: Michel Bega

Wind energy does contribute to meet the increased electricity demand during the evening peak while solar photovoltaic energy assists during the morning peak, a new report from national energy regulator Nersa shows.

The report covers 2014/15 and represents the first full year of operation for the majority of the projects.

Nersa’s report comes a few weeks after Eskom CEO Brain Molefe created a stirwhen he said publicly that renewable energy “has disappointed us”.

Molefe said the independent wind and solar projects connected to the grid do not supply electricity when Eskom needs it, during the evening peak. He complained that Eskom was forced to buy this electricity at the time of day it has a surplus of its own, at high tariffs and that a 20-year obligation in this regard was forced upon the utility. The promise of transfer of the projects to Eskom after the 20-year period is rather meaningless, since the technology will by that time be out-dated, he said.

In response the South African Photovoltaic Industry Association (Sapvia) pointed out that renewables saved the country R7.2 billion in the 18 months ended June 2015, by replacing the use of costly open-cycle gas turbines.

According to the new Nersa report, renewable generation capacity of 2 626.16MW had been connected to the grid by February 9 this year with 2 144.72MW in commercial operation.

This capacity is from 43 projects procured under the first and second bid window of the Department of Energy’s Renewable Energy Independent Power Producer Procurement programme (REIPPP).

The technology spread is as follows: Unlike for example nuclear power plants, that produce energy consistently day and night, renewable energy is typically only available when there is wind or sunshine.

Over the reporting period the capacity factors of solar PV were 25% on average and wind 31%. The capacity factor is the ratio of output over a period compared with its potential output if it were possible to operate at full nameplate capacity continuously over the same period.

Molefe’s complaint was that renewable energy is available when Eskom has a surplus, but not when it needs help during the evening peak between 18:00 and 20:00. KaXu, the first concentrated solar power plant (CSP) started commercial operations in February 2015 and is able to produce energy even after sunset during evening peak, thanks to its storage system. Its energy profile (below) shows a snapshot of its production on September 19 2015 when 24% of its daily energy output was dispatched from its storage facility during the evening peak. This, says Nersa, demonstrates that CSP technology combined with thermal storage is able to supply electricity during peak hours.

It is important to note that Eskom is currently dealing with projects from the first two bid windows. As the REIPPP programme matures and projects from later rounds become commercially operational, the profile of renewable energy production will change considerably.

In the first bid rounds there was no differentiation between solar PV and CSP, from a tariff perspective. Tariffs were not structured to incentivise provision for storage and the cost outweighed the benefits to the developer. This has since changed.

This should encourage the provision of storage and energy dispatch during the peak. The Bokpoort CSP plant, which started commercial operations earlier this year, has for example been able to maintain a capacity factor of more than 60%, thanks to its nine-hour storage capacity.

Industry players expect a move towards storage at PV plants as well and, as technology improves and the cost of storage comes down, also at wind farms. Some of the small PV installations already have batteries, but it is not yet economical on a large scale.

Molefe’s issue with the cost of renewables is not without merit. Eskom is obliged to honour a power purchase agreement (PPA) with each independent power producer and has to give preference to the use of renewable energy over its own generation capacity. The Department of Energy, not Eskom, negotiated the PPA and Eskom is bound by it for 20 years.

In early rounds, the tariffs were high as the department had to provide for a risk premium for first entrants to the new renewable energy industry in South Africa.

In its 2014/15 annual report Eskom stated that it paid R2.17/kWh on average to renewable IPPs, while its own average generation cost was 61c/kWh. It would upset any CEO who is trying to stabilise an organisation financially to have to pay R2.17 to a supplier for something he/she can produce themselves at 61c.

The average tariffs have however dropped dramatically in later rounds and wind and PV tariffs in round 4.5 can now seriously compete with the generation cost of Eskom’s old coal fleet. In round 4.5 some PV plants are said to have been contracted at as little as 60c/kWh.

The added benefits of renewables is the speed of deployment – it can be in commercial operation within two years – the fact that it does not carry the risk of volatility in fuel cost; the tariff certainty due to the PPA structure and of course its benefit in terms of climate change.

Due to Eskom’s weakness over the past few years, it probably didn’t have much of a voice in the design of the renewable programme, even though it is the off-taker. A stabilised Eskom under the leadership of Molefe might find its voice and give input into aspects of future REIPPP rounds.

Molefe would however have to be patient. It will take some time before the lessons learnt as the REIPPP programme matures, manifest at the level of Eskom’s daily power purchases.