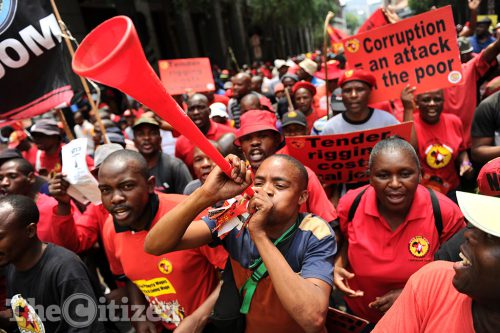 The National Union of Metalworkers of South Africa (Numsa) has said the possibility of strike action against Eskom over wage increases cannot be ruled out.

This as the power utility tables a 7% salary increase for employees.

“Eskom is offering a mere 7% as a salary increase for our members, which is below what the National Energy Regulator has allocated for manpower cost increases,” Numsa said.

“This is a decision [to strike] taken by Numsa’s national shop stewards council, comprising our shop stewards working for Eskom, which met over the last two days.”

The trade union, a former Cosatu affiliate, said it was known that electricity generation, transmission and distribution had been designated an essential service in 1997 by the Commission for Conciliation, Mediation and Arbitration’s Essential Services Committee (ESC).

“Numsa has declared a dispute in the ESC against Eskom’s generation, transmission and distribution of electricity’s designation as an essential service,” electricity sector coordinator Vuyo Bikitsha said.

“Even though parts of Eskom have been designated as being engaged in an essential service, it should be common knowledge that this is not for the whole of Eskom and, therefore, some employees should be enjoying the constitutionally entrenched right to strike.”

The National Union of Mineworkers (NUM) said it would convene a national shop stewards’ council meeting on Friday, where wage negotiations and performance bonuses would be looked at.

“We will then get a mandate from our members on whether to accept or reject the offer,” the NUM said. “But we are disturbed by comments made by Eskom spokesperson Khulu Phasiwe that the 7% wage increase tabled by Eskom would lead to deeper costs cuts, because the state utility is not cash-strapped.”

Eskom said it was committed to engaging with organised labour. The three unions representing workers at Eskom are Numsa, the NUM and Solidarity.

The NUM also accused Eskom executives of paying themselves bonuses of R6 million each and allegedly “leaking” a document of the payments to workers in a bid to “weaken” the union during wage negotiations.

“The NUM is disappointed by the decision taken by Eskom executives to pay themselves a whopping R6 million per person,” the NUM said.