As mentioned in previous BDSI indices – which applies to December’s findings – these declines are partly due to salary adjustments linked to the previous year’s inflation. These adjustments were lower in 2016.  The tough economic conditions also added further pressure.

On a year-on-year level, disposable salaries in December 2016 were lower than December 2015 and 2014.  However, the December 2016 salary level was also partly due to smaller year-end bonus pay-outs.  Also, the rate of salary adjusted increases was slower than that of consumer prices which increased due to wage agreements where previous inflation figures were lower.

The 1.5% year-on-year decline is likely to impact consumers in the months to come. Domestic consumers under this sort of income pressure are less likely to make major purchases such as cars, houses and furniture.

There is no doubt that most consumers were under pressure for most of 2016 and parts of 2015. The December BDSI suggests that this will continue in Q1 2017 as overall consumer expenditure is expected to remains subdued with lower than inflation salaries likely to continue in the next few months.

However, as 2017 increases will be based on higher inflation in 2016, the real declines should disappear as soon as the annual salary increases are implemented from March/April and the months that follow.

Employees in the South African formal sector have certainly not had anything to cheer about in 2016 apart from keeping their jobs. The weak rand and drought had a devastating impact on real incomes of employees and their families as inflation hurt consumers’ pockets.

The average employee received R14 102 in their bank account in December while the median was R10 397. Both of these are in nominal terms.

There was a silver lining in that there was a slight increase in the number of employees on the payment system. This was 0.7% higher than December 2015.

Graph 1: After inflation changes in take-home salaries and bankable pensions 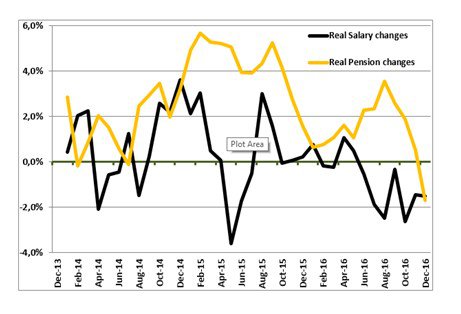 Like salaries, private pensions showed real-term declines on a year-on-year basis. The BankservAfrica Private Pensions Index (BPPI) of pensions that are paid into South African bank accounts showed a 1.7% year-on-year decline in real-terms.

This decline is likely the result of the stronger rand and the weakened equity market.

Pensioners who for the last two years have seen their incomes increase faster than employees are experiencing the first signs of a decline in real income. However, the overall buying power of pensioners is still increasing more than inflation.