Astonishingly, three of the 15 are ‘non-compliant’ on B-BBEE.

Nearly two out of three board members of JSE-listed South African retailers are white men, while over three quarters are men. A Moneyweb analysis of 15 large retailers has revealed that boards of directors are lagging when it comes to transformation, with white representation on the boards of two companies exceeding 80%.

The analysis shows that of the 154 board members in total, 99 (64%) are white men, 18 (12%) are black, coloured or Indian men, six (4%) are white women, while 31 (20%) are black, coloured or Indian women. The analysis includes most companies in the food and drug retailers and general retailers sectors on the JSE: Cashbuild, Clicks Group, Dis-Chem Group, Holdsport, Italtile, Kaap Agri, Lewis Group, Massmart, Mr Price Group, Pick n Pay, Shoprite, The Spar Group, TFG, Truworths and Woolworths*.

The three most diverse boards, when it comes to racial representation, are Massmart (at 50% white/50% black), Clicks Group (56%/44%) and The Spar Group (60%/40%). If the three foreigners nominated by parent Walmart (Enrique Ostalé, Roger Burnley and Susan Muigai) are excluded from the Massmart calculation, then it is the only listed retailer with more than 50% black representation on its board (43%/57%). If Woolworths Holdings’ seven (!) foreign directors are excluded (four British nationals and three Australians), then it has 63% black representation on its board.

Woolworths has the largest board – at 15 members – with Pick n Pay and Shoprite both at 13. Dis-Chem, Holdsport and Italtile have the smallest boards, at eight directors each. The average board size is ten.

Only two (Mr Price Group and Truworths International) seem to have made a formal point of addressing board diversity. Mr Price Group approved a policy for the promotion of gender and ethnicity diversity on the board in late March 2017. It says “the board appreciates the need for gender and ethnicity diversity at board level” and has set the following “voluntary targets”: “30% female representation; and 30% African, coloured or Indian representation”.

The group says “in considering any new appointments to the board, the Remuneration and Nominations Committee shall consider the board’s current composition in respect of the voluntary diversity targets as well as gaps identified in the board’s fields of knowledge, skills and experience”.

Truworths says one of its “governance priorities” for 2017 is the “development by the board of a policy on the promotion of gender diversity at board level, including giving consideration to whether targets should be set for achieving such diversity”. 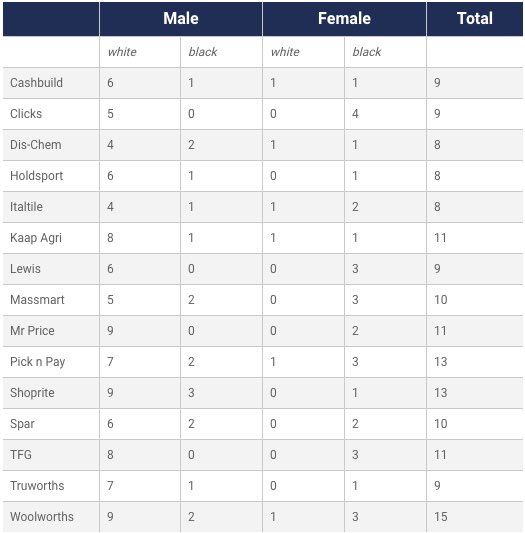 When it comes to B-BBBE status, Kaap Agri, Shoprite and Spar lead at levels three, four and four, respectively. Five lag at levels seven and eight, while three of the 15 are categorised as non-compliant: Holdsport, Italtile and Truworths. 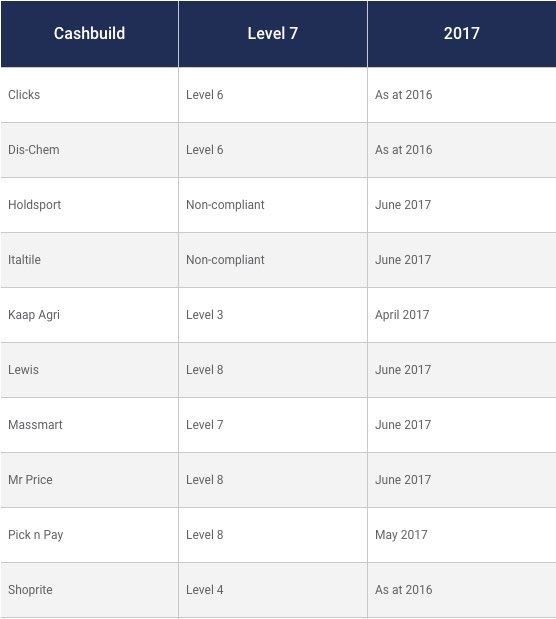 Holdsport says “the group’s first B-BBEE score of 10.99 is at a level rated “non-compliant contributor”. In the transformation report in its annual report it attempts to explain “the group’s performance against the elements of the B-BBEE scorecard and identifies the unique structural challenges it faces to improve on this score”. On the equity ownership, skills development and socioeconomic development measures, it scores nil.

It says the group’s “B-BBEE contributor status target for the year ahead is Level 8 (new scorecard). Management has strategised an approach to improve compliance with the new legislation, through, among other means, training and recruitment, and supplier and enterprise development. Immediate-term goals are to increase the scale of the group’s rural learnerships and workplace experience programmes; the group has also contracted a specialist provider to assist with the recruitment of disabled individuals”.

In its most recent integrated report, the chair of Truworths International’s Social and Ethics Committee, Michael Thompson, writes that “the committee has been informed that at the financial year-end the group had recorded a level of non-compliance with the recently revised voluntary codes of good practice on B-BBEE as measured by the dti’s generic scorecard. The committee has been advised that, in collaboration with external consultants, management is considering various initiatives, including revised procurement strategies and supplier and enterprise development initiatives, aimed at addressing the group’s B-BBEE status during the course of the 2017 financial period”.

** In this analysis, white women are counted as ‘white’, even though under employment equity legislation they are categorised as previously disadvantaged.