Execs are seeking clarification on the terms of a conditional bonus that should be paid out in 2020.

The former shareholders of Tekkie Town have launched another legal claim against Steinhoff International Holdings to recognise the terms of a conditional earn-out bonus that would be paid in 2020 and which could amount to as much as R1 billion.

Two of Tekkie Town’s executives and shareholders – founder Braam van Huyysteen and Bernard Mostert – as well as a number of other Tekkie Town executives joined Steinhoff as part of the terms of the acquisition announced in 2016 which saw Steinhoff acquire Tekkie Town for R3.2 billion. Tekkie Town was then transferred into Star (Steinhoff Africa Retail) under the Speciality Fashion and Footwear division when Star listed in September last year. Van Huyysteen is currently the chairman of the Speciality division while Mostert is the CEO.

The former shareholders of Tekkie Town were prevented from selling their shares in Steinhoff for a period of three years after the acquisition.

The “earn out” as it is referred to, essentially operates in the form of a bonus scheme that came into effect at the time Steinhoff concluded the acquisition of Tekkie Town in August 2016. It meant that Steinhoff agreed to pay the former shareholders a bonus based on the performance of Tekkie Town while under the control of Steinhoff.

While the terms were agreed to by Steinhoff’s previous CEO, Markus Jooste, Star CEO Ben la Grange amended them with Van Huyysteen to broaden the scope of the bonus scheme to include the performance of the entire Speciality Fashion and Footwear division.

“Payments due under the bonus scheme would be calculated on the performance of the Speciality division beginning October 1, 2017, and running until  September 30, 2020,” says spokesman for the previous shareholders of Tekkie Town, Warren Erfmann. “In effect, it would equate to 20% of the increase in Ebitda from year 1 (2018) to year 3 (2020) all other things being equal,” says Erfmann (who provided the formula below).

He adds that based on current projections, the bonus could be anywhere between R455 million to R890 million. 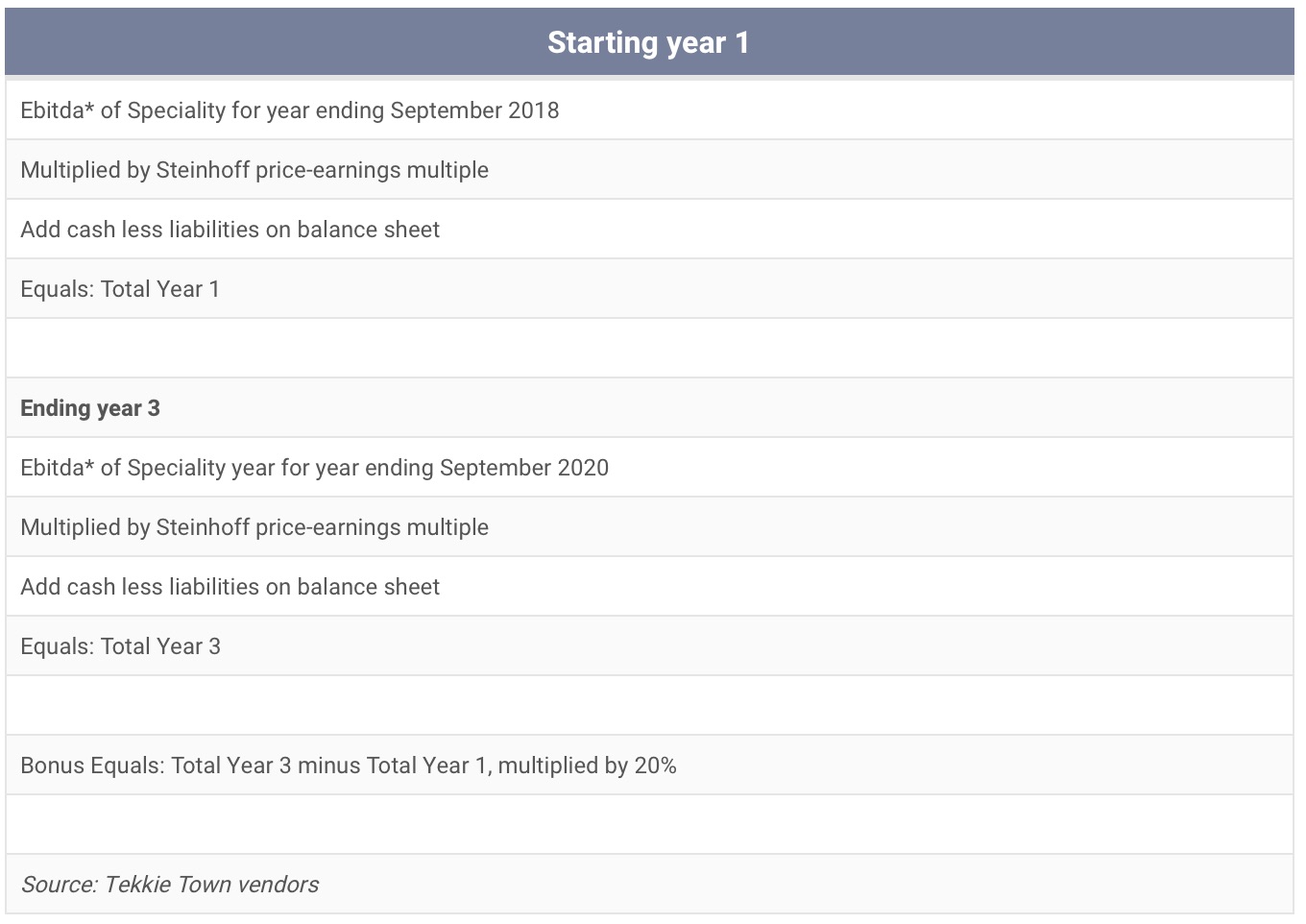 “Part of the reason we are pursuing the claim for the earn-out through legal means is because no contingent liability has been raised in Star’s financial statements, including the 2017 pre-listing statement,” says Erfmann. “So, given the well-publicised issues surrounding Steinhoff’s accounts, we want to ensure that this agreement is formally recognised.”

The other issue in Erfmann’s view is the use of Steinhoff’s price-earnings multiple. “We believe it would be fairer to apply the price-earnings multiple of Star, which is significantly less volatile than its parent company as a result of the absence of any concerns over the integrity of its audited financial statements,” says Erfmann.

Steinhoff provided the following response: “Steinhoff is currently in a legal dispute with the Tekkie Town vendors. In light of these proceedings, we can unfortunately not provide you with more details at this stage.”