The mountain Ramaphosa must climb is -2.2% higher 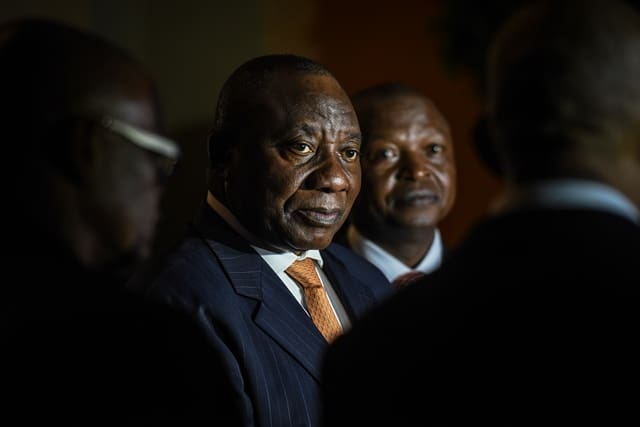 President Cyril Ramaphosa and Deputy President David Mabuza are seen speaking to media outside the Skweyiya family's residence during a visit after the passing of Dr Zola Skweyiya to pay their respects, 12 April 2018, Pretoria. Picture: Jacques Nelles

The 2.2% GDP decline in the first quarter (nearly four times worse than the consensus forecast) was a punch in the stomach. The immediate investor confidence spike that followed Ramaphosa’s election as ANC president hasn’t translated into an economic resurgence.

Several economists still believe that a resurgence will become more visible in the second half of the year and that an annual growth rate of 1.5% remains achievable. This seems optimistic in light of the first quarter performance. Some commentators remarked that the -2.2% is proof of a fading Ramaphoria. The number, however, must be seen as a Zuma legacy.

The damage done to the economy by the Zuma administration will be with us for many years and will take more than a few months to fix. It will also take unpopular decisions to address the serious structural problems that hamper economic growth.

It is naïve to think that Ramaphosa will take such decisions in the near term, as the ANC is currently such a fragile party that any unpopular decision may force a split, something that would be political suicide.

Despite this, Ramaphosa has achieved a lot since February. He immediately addressed leadership issues in his cabinet, law enforcement agencies, Sars and state-owned enterprises.

But the -2.2% number should be the wake-up call that says tougher action is needed. It will further dent confidence levels in the private sector, which is probably the most important hurdle for accelerated economic growth.

A good place to start is to address the policy uncertainties in the mining sector and the land expropriation without compensation proposal. It is unfathomable that South Africa hasn’t been able to finalise policies for land reform and empowerment in 24 years, while it took less than three years to pen the best constitution in the world.

If we are to see a swift bounce in economic growth, these policies need to be depoliticised and redesigned to boost inclusive growth and invite investment. But while the uncertainty drags on, the economy will continue to stutter. It will also hollow out Ramaphosa’s message that investors are welcome in South Africa and that we are open for business.

Standard Bank’s Goolam Ballim provided an excellent perspective during an interview on the Moneyweb@Midday show regarding the impact of such policy uncertainty.

On a positive note, he added that the economy can rebound swiftly if addressed appropriately.

“I think there is pent-up investment demand given the extent to which investment underperformed relative to retail sales. This means that the output gap in the economy has shrunk. It is a rubber band that has been stretched into the abyss and is waiting for some level of release,” he said.

I agree with Ballim that if some sober thinking prevails, and there is a release via the removal of policy uncertainty, we will see an accelerated economic recovery.

Ballim believes that we should see some recovery in the second half of the year and that 2% growth in 2019 may be on the cards.

Although this growth is still not enough to remotely solve the social problems in the country, it is a start.

Hopefully Tuesday’s -2.2% number will ignite the urgency necessary to address the structural constraints to investment and growth. The expropriation without compensation policy might be a good place to start.