Moneyweb has learnt that trade unions represented at Eskom are demanding a 9% salary increase for their members in the first year of a proposed three-year wage agreement.

This comes after the unions rejected Eskom’s proposal for a four-year agreement with a 4.7% increase in the first year and an inflation-linked increase in each of the subsequent years.

Negotiations resumed this week after public enterprises minister Pravin Gordhan intervened in a violent stand-off between Eskom, which initially refused any increase, and the unions that retaliated and put power supply in the country in jeopardy with strike action.

The negotiations take place at a time when Eskom has run out of cash and its status as a going concern is at risk.

National energy regulator Nersa has granted Eskom R4 billion less revenue from electricity tariffs than the R28 billion it applied for to cover its employee cost. The award shows no increase compared to the previous year, and the small drop in staff numbers projected for the current year could not make up the difference.

In its assessment of Eskom’s employee benefit cost, Nersa showed that sharp increases in certain benefits granted to employees over the past few years have resulted in high costs. 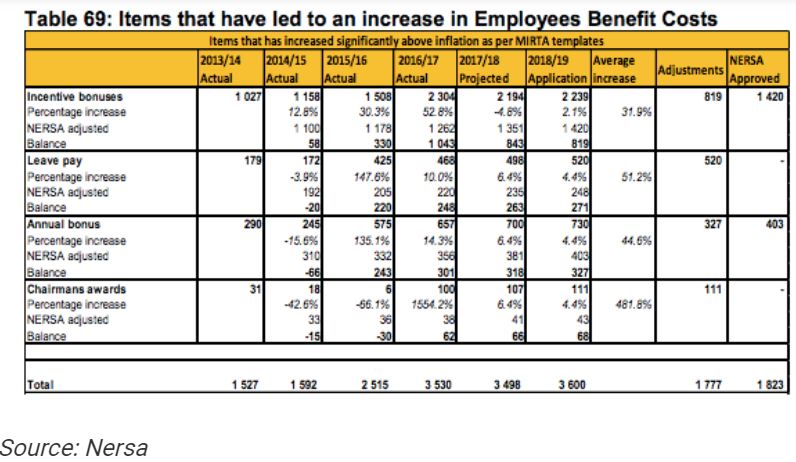 Eskom has asked the High Court to review and set aside the Nersa decision. Nersa will defend the action, which could take year to finalised.

Moneyweb has learnt that against this background unions are focusing their negotiations on the huge gap between what workers in the bargaining unit earns and what those in management earn, rather than an increase in total employee cost, which could see tariffs rise even further.

Moneyweb earlier published the salary scales of Eskom staff who form part of the bargaining unit. It showed that these workers earn well below the R790 000 ‘average’ annual salary based on numbers disclosed in the Eskom annual report.

Moneyweb has now obtained additional information that shows that these workers earn on average R546 091 per year or R45 507 per month.

It stands to reason that the 6 000-odd Eskom staff outside of the bargaining unit, that is management and executives, must earn much more to push the average income from R546 000 per annum to more than R700 000.

Based on the data Moneyweb obtained, economist Mike Schüssler calculated that the median earnings of bargaining unit workers, which refers to the point where half of the workers earn more and half earn less, is about R300 000 per year or R25 000 per month. These numbers include performance bonuses.

Unions are apparently now putting the spotlight on what management and the Eskom executive earn in comparison with the share of the cake awarded to their members.

On Thursday morning a picture appeared on social media of what is purported to be Eskom CEO Phakamani Hadebe’s payslip. The document indicates an annual remuneration of R8.5 million based on monthly net earnings of R404 201,58.

Moneyweb has asked Eskom for confirmation that this reflects Hadebe’s earnings correctly, but has not received any feedback as yet.

However, it is in line with the R8.8 million total annual remuneration Hadebe’s predecessor Brian Molefe earned, according to the utility’s 2017 integrated report.