Foreign selling of government bonds must be seen in context

It’s unlikely to become a flood. South African flags are seen flying at half-mast at Fountains Circle in honour of ANC stalwart and freedom fighter Winnie Madikizela-Mandela who passed away over the Easter Weekend, 4 April 2018, Pretoria. Picture: Jacques Nelles

“Considering South Africa’s reliance on foreign inflows to finance the shortage in domestic savings, the large selling is a concern and partly explains the weakness in the currency over the last while,” Granate wrote in a recent note to clients.

However, it is important to put this in context. While the scale of the selling is notable, foreigners still own around 40% of South African government debt. As the chart below shows, back in 2006, they owned just 8.6%. 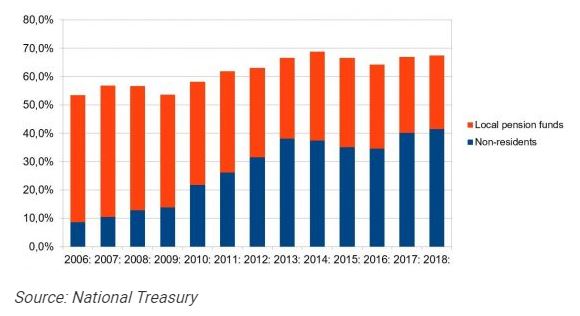 The head of fixed interest at Granate, Jonathan Myerson, says there are three important things take into consideration when looking at the significance of the selling we have seen this year. The first is that while R39.2 billion is a big number, it is a small percentage of the total foreign holding. Since South Africa’s total debt has also increased substantially, it’s also a relatively small portion of the overall market.

“When foreign investors sold R19.5 billion of South African debt back in 2008, that was 5.3% of the total outstanding government debt,” says Myerson. “In the last few months they have sold more, but it’s a smaller percentage.”

No shortage of buyers

Secondly, local pension funds own a far smaller proportion of government bonds than they have historically. They have therefore been absorbing the foreign selling quite easily.

“Yes, foreigners have sold a lot and can sell quite a lot more, but on the other side South African asset managers are holding nowhere near as much as they did a few years ago,” Myerson notes.

“A lot of the industry has been short on South African assets, but with corporate bond yields coming down those who have been short on government bonds are rotating back into the market,” he says. “So there is still quite a bit of appetite.”

Relative to equities, government bonds are also looking the cheapest that they have for a while. Many South African asset managers are therefore very comfortable increasing their allocations.

“Government bonds are still offering high real yields,” Green points out. “Ten year bonds are yielding around 8.8% at the moment, and with inflation at 4.4% that means you are seeing a real yield of more than 4%. That’s a good opportunity from our point of view.”

It’s not about us

The third important consideration is the broader global context in which the sell-off is happening. In February and March, foreigners were actually net buyers of local bonds. April was neutral, so it is only in the last two months – when concerns have grown around emerging markets and a potential trade war – that sentiment has reversed.

“The sell-off hasn’t been about the idiosyncrasies of South Africa’s fiscal outlook,” Myerson notes. “Foreign investors are more concerned about what is happening with emerging markets as a group.”

He says this is very apparent if one considers that the scale of the selling over the last two months is larger than at any point in 2017, when there were real concerns about South Africa’s fiscal stability and the threat of government bonds being downgraded to sub-investment grade.

This also makes it likely that the market may stabilise in the near term. Green suggests that there are already signs this may be happening.

“If you look at the yield on 10-year bonds, it widened to 9.20% at its peak, but has come back to 8.75%,” he points out. “So more broadly the selling has impacted bond yields, but the sentiment seems to have stabilised and the take-up on the local market has driven yields down again.” 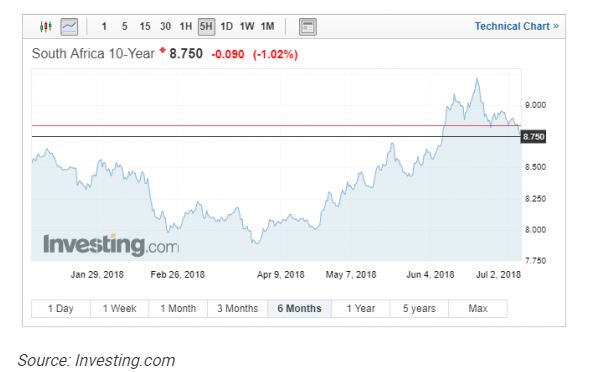 Myerson says it’s too early to say that the trend has definitely reversed, but it’s unlikely that it will continue over the longer term unless there is a significant emerging market scare.

“I wouldn’t be surprised if we see a bit more selling, but the rate of selling declines as things become cheaper,” says Myerson. “Foreign investors have made adjustments because of their views of risk in emerging markets, but I’m not concerned at this stage that it will become a flood of foreign selling. It’s not great when they sell, but I’d be more worried about an actual downgrade, and that has now moved out quite a long way.”