The peculiar case of the Picvest billions: Part 2

Very few of the conditions of the business rescue plan were ever implemented. 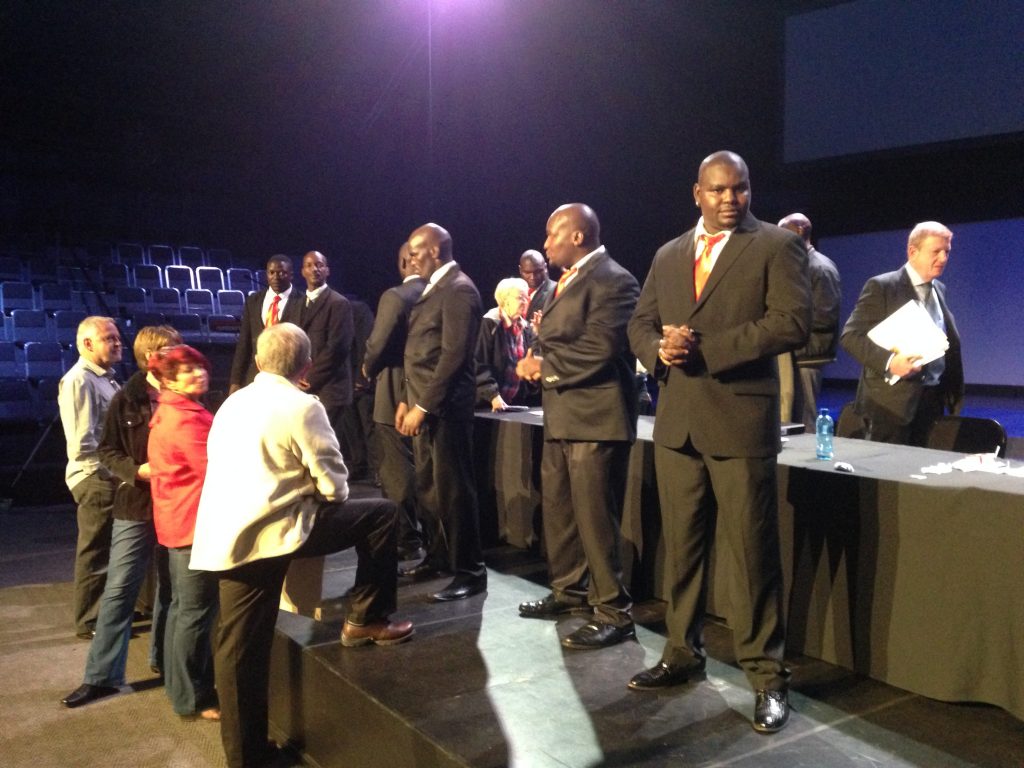 Bodyguards prevented investors from approaching the Orthotouch representatives during the shareholders' meeting in November 2014 where HS investors approved the Section 155 Scheme of Arrangement. At the far right is Derek Cohen, the former receiver of the scheme, who chaired the meeting. Picture: Supplied

This article continues to explain the complicated history of the Highveld Syndication (HS) schemes since their inception. Part 1 is available here and looks at the early years and the events leading up to the HS companies being put into business rescue. It should be read in the context of Nic Georgiou’s concerns that this journalist is biased.

Following the implementation of Hans Klopper’s business rescue plan (BRP) in December 2011, very few of the plan’s conditions were implemented.

The BRP vowed that all the HS properties would be transferred to Orthotouch at their deemed market value of R2.6 billion. In addition to this, Nic Georgiou and entities related to him would transfer additional properties valued at R1.5 billion to Orthotouch. The plan also declared that if the Orthotouch management sold properties to raise finance to improve other properties, such proceeds could only be utilised within Orthotouch.

This simply did not happen.

Moneyweb’s analysis of the title deeds shows that shortly before and after the approval of the BRP there was a rapid sell-off of properties which saw the overwhelming majority of former HS properties being sold directly, or via Orthotouch in back-to-back transactions, to third parties. (A back-to-back transaction is a transaction through which entity A sells a property to entity B, and entity B then sells it immediately to entity C without taking transfer.)

The most notable transactions were the sales of around 27 properties by Zephan to Accelerate via Orthotouch in 2013. Orthotouch never took ownership of the properties and according to Moneyweb’s calculations incurred losses of nearly R800 million related to the transactions.

Currently, Orthotouch doesn’t own a single property. (Several articles to follow will analyse these transactions in much more detail.)

Three years after the adoption of the BRP, and after the sale of a significant number of properties, Orthotouch informed investors that its income was insufficient to continue paying investors in accordance with the BRP.

Investors were presented with a Section 155 Scheme of Arrangement (SOA) which was held as the only alternative to liquidation of Orthotouch and the HS Companies, and this scheme was approved and sanctioned by the High Court in November 2014.

Zephan was the financial proposer and the underwriter of the scheme. Due to the fact that no properties were transferred to Orthotouch, Orthotouch became totally dependent on payments from Zephan to repay investors.

Shortly before the adoption of the SOA investors aggressively voiced their discontent. It was almost open warfare between two distinct camps. In the one camp was Georgiou, Klopper and Orthotouch; and in the other, specific groupings of investors and brokers who challenged the validity of the SOA.

The Georgiou camp referred to the leaders of these groupings as “detractors” (a term that originally featured in the BRP) and accused these detractors of actively working against the rescue efforts with the goal of inducing the liquidation of the HS companies.

The detractors were never identified.

The Georgiou camp also alleged that their actions discouraged banks from providing funding to allow for the upgrading and maintenance of the properties, which in turn prevented the scheme from paying investors their dues.

Despite not being named, the detractors were most probably the group of investors and brokers who founded the Highveld Syndication Action Group (HSAG).

The HSAG, whose legal representative is Jacques Theron of Theron and Partners, claimed it garnered the support of nearly 7 000 paying investors and launched applications to have the SOA rescinded and for the certification of a class action. This was the start of numerous legal battles between Georgiou/Orthotouch and the HSAG.

The most notable were two cases where two High Courts found Georgiou tried to scuttle and sabotage the HSAG applications when he secretly approached the six individual applicants who acted on behalf of all the HSAG investors and settled their claims. In return for the settlement, the applicants stealthily withdrew the class action certification and rescission applications without informing the HSAG or Theron.

Georgiou appealed against these judgments, but withdrew his appeal after a short argument before the Supreme Court of Appeal. Georgiou also tendered punitive costs to the HSAG and claimed afterwards that his legal team was not allowed to present its legal argument.

Orthotouch claims SCA did not allow for legal argument

Another legal process is being driven by Advocate Louis Bolt, who represents a number of individual HS 21 and 22 investors. He instituted legal claims based on the specific buyback agreements Georgiou agreed to when he signed the original HS contracts.

Bolt has been successful, with the Pretoria High Court finding that Georgiou must honour the agreements. This opened the door for all HS 21 and 22 investors to institute similar claims against Georgiou – claims that could amount to more than R2 billion.

Georgiou was recently granted leave to appeal the judgment in the Supreme Court of Appeal (SCA) and the case will be heard next year.

Bolt also won several default judgments through which Zephan was ordered to repay a number of investors. There is also a pending liquidation application of Zephan that will be heard in due course.

Despite these legal challenges interest payments to investors were made in terms of the SOA. Georgiou claims a total of R1.3 billion has been paid to investors.

But in June this year, and shortly after Georgiou’s withdrawal of his SCA appeal, investors were informed that interest payments to those who support the legal challenges of Bolt and the HSAG had been suspended.

However, it appears that the suspension of interest payments is in contravention of the SOA, as the SOA does not allow for any discretion for Orthotouch to selectively pay individual investors. This also led to the resignation of Derek Cohen, the receiver of the Orthotouch scheme.

The Moneyweb investigation shows that Orthotouch doesn’t currently own any properties and has no independent source of income.

The title deeds of these properties show that they were acquired for around R300 million, which hardly seems adequate to deliver the returns to repay investors in terms of the SOA. In the affidavit in defence of the liquidation application, Georgiou confirms that he owns nine unencumbered properties valued at around R266 million.

Orthotouch is therefore an empty shell and totally dependent on Zephan to provide the funds to pay interest and capital to investors in terms of the SOA.

The research reveals that there is not much left of the 79 properties the 18 700 investors ‘bought’ for R4.6 billion cash more than a decade ago.

Moneyweb sent a draft version of this article to Georgiou prior to publication. He did not respond.