Delangokubona Business Forum secretary says there are people going around misusing their name, but businesses claim they're being terrorised. 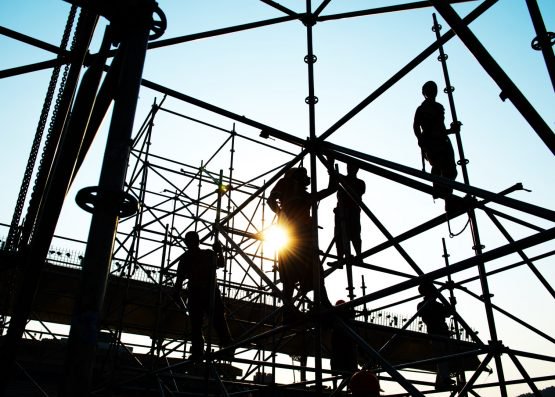 A business forum allegedly behind several armed attacks on construction projects worth over R25 billion has again denied any involvement in criminal activity after Minister of Finance Tito Mboweni was approached to intervene.

The Delangokubona Business Forum, a KwaZulu-Natal-based group claiming to advocate for local business and community interests, has been repeatedly accused of sending armed men to demand a stake in the projects from professionals on construction sites.

But the group’s general secretary, Thulani Myeza, insisted they were not involved in any incidents of criminality.

“We are not criminals. We are businessmen; we are professionals and we have been doing good work in our communities.

“These people just write about us because they do not want competition, so they write lies about us,” he said, challenging accusers to approach the police.

On Friday, about 50 members of the notorious Delangokubona Business Forum protested near the Tongaat River bridge, demanding jobs on the R10 billion development site at Zimbali Lakes.

The Association of South African Quantity Surveyors (ASAQS) sent out a grave statement calling for national intervention in what it described as a major threat to projects worth billions. The association’s Yunus Bayat said there was widespread concern in the built environment about the “construction mafia” and gang-related activities on project sites.

“The Delangokubona Business Forum continues to intimidate foremen, project managers and construction bosses by going onto project sites and demanding a stake in their projects.

“As professionals working on these projects, we cannot protect ourselves from this type of violent intimidation and we are no match for the AK-47 automatic weapons that they bring with them,” he said.

But Myeza said: “That is not us. Maybe there are people going around using our name, but that is not what we do. The people who are doing that must be arrested.

“What we do is similar to when someone sees a business and they approach it and ask for a job. That is not criminal.

“All we do when we see a project in our ward is write a letter asking that they make sure the project also benefits the community and we get a stake in the millions being taken to other provinces.”

According to ASAQS, construction projects worth more than R25.5 billion were being violently disrupted and halted. This week, the South African Forum of Civil Engineering Contractors issued an urgent plea for action from Mboweni.

“These illegal site disruptions caused Aveng and European-based Strabag International to pull out of the project, which is part of the N2 Wild Coast road construction project,” said Bayat. It was reported to the police and interdicts were obtained, he added, but the suspects were released shortly afterwards.

According to the association, a R2.4 billion German oil storage investment project under construction by WBHO in Saldanha, Western Cape, was halted after armed gangs arrived on site.

“The gangs demanded to be part of the project and burnt the properties to the ground. The pictures of the scene look like footage from a war zone.”

Again the police were called, but they only arrived hours later and said the issue had to be handed over to the Paarl police station.

“Contractors, female engineers and other staff had to run for their lives into the veld. The response from the police isn’t good enough,” said Bayat. But Myeza laughed off the allegations, saying it was either a smear campaign by people who saw their businesses as a threat or a case of mistaken identity.