India's debt-stricken Jet Airways halted all of its operations Wednesday after failing to secure emergency funding from lenders, leaving it teetering on the edge of bankruptcy. 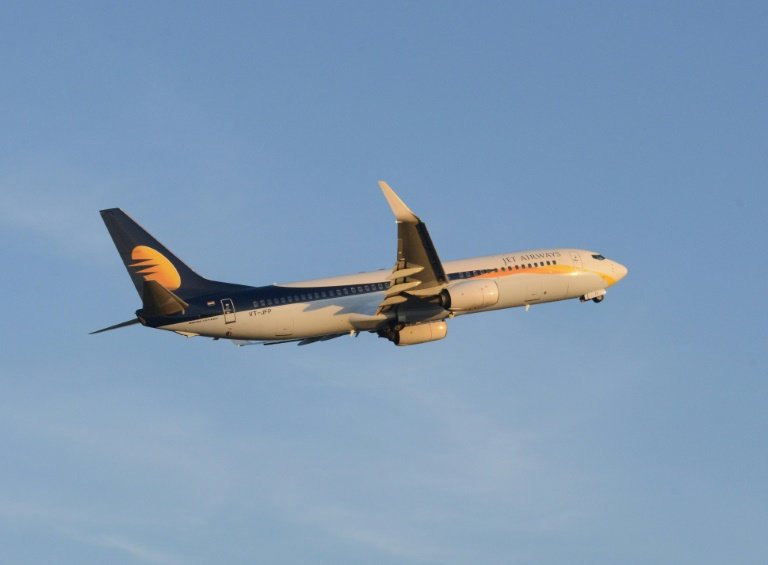 Jet Airways was once India's second-biggest by market share but is on the brink of collapse with debts of more than $1 billion. AFP/File/Sam PANTHAKY

“Jet Airways is compelled to cancel all its international and domestic flights. The last flight will operate today,” it said in statement, adding that the decision would take “immediate effect.”

Jet had asked a consortium of lenders led by the State Bank of India to urgently provide four billion rupees ($57.5 million) but said that this had not been forthcoming.

“This has been a very difficult decision but without interim funding, the airline is simply unable to conduct flight operations in a manner that delivers to the very reasonable expectations of its guests, employees, partners and service providers,” it added.

The airline was once India’s second-biggest by market share but is on the brink of collapse with debts of more than $1 billion.

Jet was operating just five planes on Wednesday because it could not pay its bills, down from a fleet of more than 120 at its peak.

The carrier has cancelled hundreds of flights in recent weeks, stranding thousands of passengers.

It has repeatedly defaulted on loans and failed to pay staff in recent months.

The consortium took control of Jet in March, pledging to give $218 million in “immediate funding support” as part of a debt resolution plan.

But they have failed to release most of the money and the banks also failed to agree how to proceed after a meeting of several hours on Monday.

The SBI-led consortium is looking for a buyer for Jet and a deadline passed on Friday for prospective bidders to express an interest in acquiring a 75 percent stake in the carrier.

The SBI is yet to announce a shortlist of prospective bidders but Indian media said four were in the running including Etihad Airways, which already owns a 24 percent stake.

“Jet Airways will now await the bid finalisation process by SBI and the consortium of Indian Lenders,” the airline said, adding that it hoped to resume services “as soon as possible”.

A collapse of Jet, and the loss of more than 20,000 jobs, would deal a blow to Prime Minister Narendra Modi’s pro-business reputation as he seeks a second term in ongoing national elections.

Mismanagement has also plagued the airline.

Analysts trace the start of Jet’s financial problems to its 2006 purchase of Air Sahara for $500 million in cash.

Founder Naresh Goyal reportedly ignored the advice of associates who said the cost was too much.

Goyal, 69, launched Jet in 1993 after the Indian government passed a series of reforms designed to make the economy more market-driven.

The Mumbai-based carrier quickly gained a reputation for introducing new initiatives — Jet was the first Indian airline to offer a frequent flyer programme and in-flight entertainment.

But it began to take a battering from new, well-run budget airlines including IndiGo, GoAir and SpiceJet, which were founded between 2005 and 2006.

Alarm bells about Jet’s financial predicament started to ring loudly in August when it failed to report its quarterly earnings or pay staff, including pilots.

It later reported a loss of $85 million.