Steinhoff gives investors hope but they will need even more patience 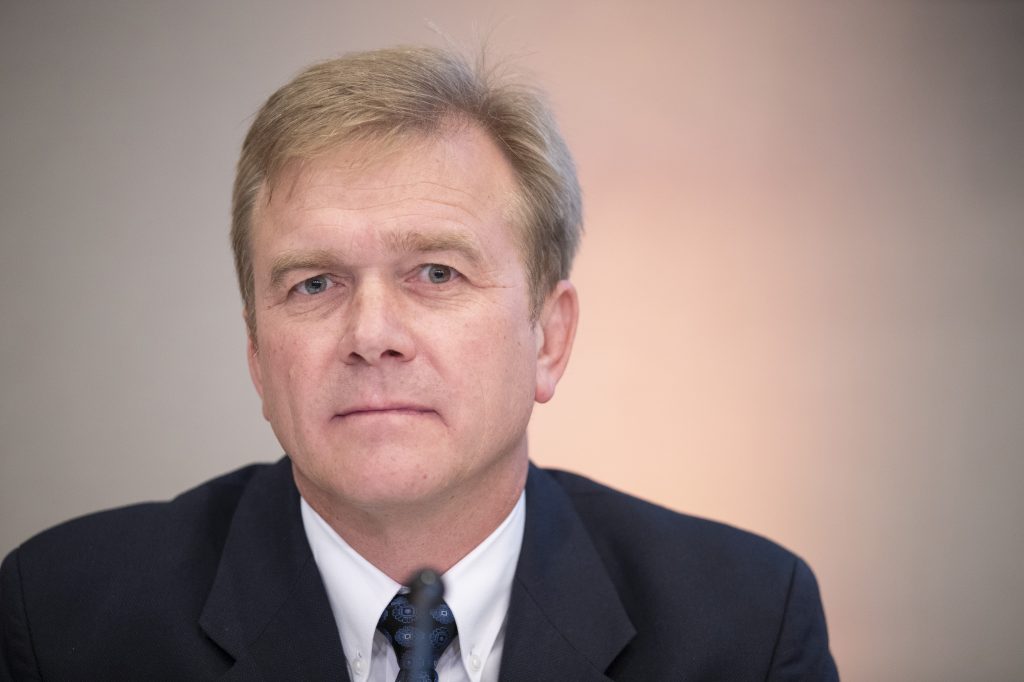 Steinhoff CEO Louis du Preez says in his review of the results that the group made progress to ensure financial stability going forward. Picture: Moneyweb

Investors had anxiously awaited Steinhoff’s results for the 2017 financial year and will be even more impatient to get their hands on the 2018 annual report. Management says it aims to publish its results for the year to September 2018 in the next few weeks.

If the audited report for 2017 is anything to go by, the figures for 2018 will make for compelling reading. In addition to assurance that Steinhoff has accounted for all the problems in the 2016 and 2017 financial years, investors will be hoping the 2018 statements don’t contain any (more) nasty surprises.

The restated results for the 15 months to the end of September 2016 show a loss compared to the fictional results originally published.

Earnings were adjusted dramatically from a profit of €1.44 billion to a loss of €237 million and earnings per share from 37.8 cents to a negative 7.6 cents.

The restated figures exclude the abnormal transactions between group companies and with related parties, which were seemingly designed only to inflate earnings. The figures also include impairment of tangible and intangible assets to the amount of €229 million.

Cash flow for 2016 fared worse, with the restated figures showing that Steinhoff had a cash balance of €687 million at the end of the financial year instead of the previously reported €2.86 billion.

The new management team chaired by Heather Sonn says the preparation of the financial statements was extremely complex due to the need to determine the correct accounting principles to apply in order to account for the implications of irregularities over a period of several years.

The irregularities involved a substantial number of parties within and outside Steinhoff.

“This has been further exacerbated by the fact that certain key individuals, with the knowledge to help unravel these complex transactions and the consequential effects thereof, have not made themselves available for questioning,” says management in a foreword to the report addressed to shareholders.

Exact details of all transactions and the individuals involved are not disclosed in the latest report, with management saying the full initial investigation report by PwC will not be published as it is considered confidential and contains information deemed legally privileged. Certain facts, however, were made public, and investigations are continuing.

The financial statements for the year to September 2017 were even worse than the 2016 restated figures. Steinhoff reported a loss of nearly €4 billion, equal to nearly 96 cents per share. This translates to a total loss of more than R63 billion in the financial year and a loss of R15 per share at the exchange rate of R15.80 per euro at the end of September.

However, it is important to take a closer look. Notes to the income statement show that downward adjustments to goodwill, other intangible assets and property, plant and equipment to the tune of €3.9 billion contributed the lion’s share to the loss.

If these adjustments bring to book the problems, and account for the dishonesty, investors can look forward to the 2018 results to gauge the real operating performance of Steinhoff’s underlying operating companies – and measure the trace of optimism one can pick up at times when reading management’s review of operations.

Steinhoff CEO Louis du Preez says in his review of the results that the group has made the progress needed to ensure financial stability going forward. “We have been engaged in a tireless effort to restructure our finances since December 2017 and are now entering the final stages of this process. We are grateful to our creditors in agreeing to a lock-up agreement in July 2018, giving us the opportunity to develop a restructuring plan which will give the group a period of financial stability to 31 December 2021.”

Light on the horizon

Du Preez indicates that it is not all doom and gloom.

He mentions that sales increased to €18.8 billion in the 2017 year compared with €16.1 billion for the 15 months to September 30, 2016, largely due to the inclusion of Mattress Firm in the USA, Poundland in the UK, Fantastic in Australia and Tekkie Town in South Africa. These assets were acquired just before and during the 2017 financial year.

While some of these acquisitions proved to be successful, the aggressive international expansion of recent years was terminated after the announcement of the accounting fraud.

Management says that to consider Steinhoff’s potential properly, it also calculated a figure to give investors an idea of sustainable earnings before interest, tax, depreciation and amortisation (Ebitda), which excludes suspect transactions of previous years. Sustainable Ebitda amounted to €765 million in the 12 months to the end of September 2017, compared to €753 million in the previous financial year, which spanned a period of 15 months.

However, management reported that much has been achieved in restructuring the debt. The new management team was able to gain support from bondholders and long-term creditors to agree to the financial restructuring, while “going a long way to reduce debt, and to decentralise debt” to each of its operating subsidiaries.

The group sold some of its assets such as its interest in SA diversified industrial group Kap, Unitrans Automotive and financial services group PSG. It reduced its interests in its SA retail assets when it listed Steinhoff Africa Retail (Star) on the JSE.

It also sold a property in Europe, three corporate jets and several other European companies. These disposals netted Steinhoff in excess of €1.4 billion, which was largely used to reduce debt. Management points out however that current liabilities still exceed current assets and that Steinhoff still has a long way to go to safeguard it from failure.

The annual report gives some information about the 2018 financial year and also refers to the 2019 year. Management warns that it “expects that consolidated net sales will be reduced by the impact of several factors, including the disposals, a weaker global economy and stronger competition in our markets”.

Steinhoff also expects that operating expenses will be significantly higher in 2018 than in 2017 due to the substantial increase in advisor costs and professional fees associated with the investigation and restructuring efforts.

Management states that shareholders can expect these factors to have an impact on operating income, before impairments, in both the 2018 and 2019 financial years. It also cautions that ongoing legal actions against Steinhoff may impact the group in future years.

It will be interesting to see how investors react to these results and the new management’s efforts so far. In the past year Steinhoff has traded mostly between 160 and 200 cents – a far cry from its high of R97 in 2016 – with investors seemingly taking a gamble that the group will recover.

In a certain sense, Steinhoff’s current situation is similar to the days of junk bonds and leveraged companies that could deliver good returns, or not.

And then there is the subject of salaries paid to former executives. In the 15 months to September 2016 and the 12 months to September 2017, the top three executives – Markus Jooste, Ben la Grange and Danie van der Merwe – received a total of more than €25.7 million in salaries and, ironically, performance bonuses. One wonders what shareholders will have to say about this R385 million-odd when Steinhoff eventually holds its annual general meeting.