Why Ramaphosa may have wanted to tie white people to trees

Prolonged low economic growth could lead to even more economic flight by those with skills and capital, regardless of racial grouping. Is South Africa’s “radical transformation” from a leader to a laggard in the upper middle-income countries the cause or the result of a brain drain? It is hard to tell. What is certain is that there is an extremely strong inverse correlation.

It is so strong that one can use one statistic to deduce the other – and if high-skilled emigration continues, the country’s decline towards the ranks of the lower middle-income countries will also continue.

Figure 1: High-skilled emigration and the slide to the bottom During this time, the number of SA-born residents in high-income countries (HICs) increased from 307,000 to 745,000 (United Nations Department of Economic and Social Affairs, Population Division, 2017). This index is portrayed by the blue line in Figure 1.

The two lines form a mirror image and indicate an extremely strong correlation.

Correlations don’t prove causality. One cannot say without further analyses that emigration to HICs is causing SA to be radically economically transformed from a leader to a laggard. Likewise, one cannot deduce that SA’s slide against other upper middle-income countries is the cause and the driver of emigration to high-income countries. However, the correlation is extremely significant; significant enough for one to confidently deduce that if one goes up the other will go down.

Even President Cyril Ramaphosa seems to be aware of this correlation, indicating during the election campaign that he wanted to tie white South Africans to trees to prevent them from emigrating.

HICs in general have high standards for granting residence permits. One can assume that the majority of South Africans finding permanent residence in those countries are either professionally qualified or have artisan skills that may be in short supply in the HICs, such as hairdressers and plumbers

Figure 2, based on UN data, plots how the exodus of skilled emigrants to HICs increased linearly from 1990 to 2017. Of significance is that during this period the number of South Africans born in low-income countries essentially remained flat, with a decrease from 42,341 to 39,259. 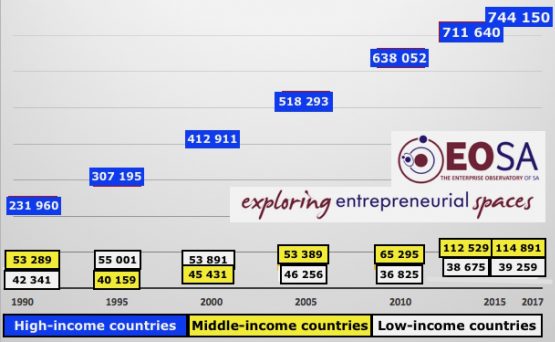 This is a strong indicator that economic deterioration in South Africa – with its business-unfriendly environment (high crime, high regulatory environment, deteriorating infrastructure, high port tariffs and low productivity as well as unreliable and costly electricity) – is a driver of professional and skilled emigration.

Chaining South Africans to trees (through prescriptive investment) will not stem the emigration of productive knowledge.

There are clear indications that the brain drain is continuing and even accelerating. For instance, Emmanuelle Wintergerst, head of the skills assessment business unit of Engineers Australia, confirmed to the Enterprise Observatory of South Africa (Eosa) that there has been a doubling in the number of South African engineers asking for a skills assessment in order to be allowed to practise in Australia (see Figure 3). 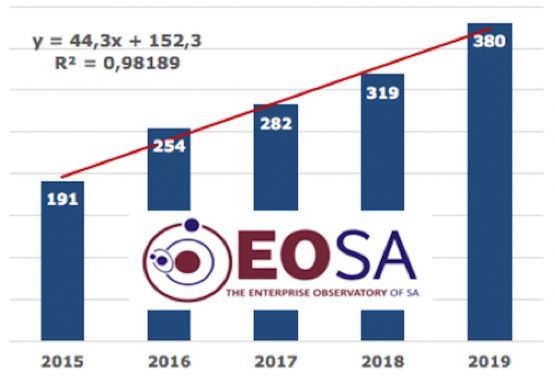 Source: Eosa, using data from Engineers Australia; the figure for 2019 is an extrapolation based on the number of enquiries received so far this year.

If government is serious about changing the trend towards mediocrity, it will:

In his 2017 New Deal manifesto Ramaphosa promised as a first priority “an unrelenting focus on economic growth”, setting a 3% growth rate goal for 2018. The growth rate for 2018 was a mere 0.8%. However, since his inauguration as president, his focus has been more inward, aimed at balancing the internal infighting within the ANC, with the economy receiving insufficient attention.

It is unlikely that South Africa will experience a high economic growth rate in the short term. If low economic growth is prolonged it could lead to a further economic flight: in this instance not by the poor seeking better prospects, but by productive capital seeking opportunities where their skills and talents will be appreciated and accommodated.

Johannes Wessels is director of the Enterprise Observatory of SA (Eosa).

This article was originally published on the Eosa website here.