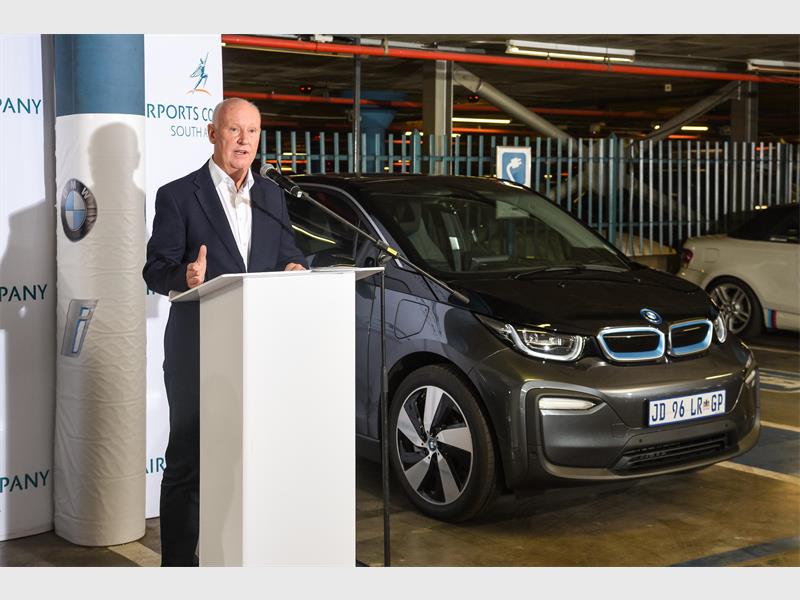 To welcome the collaboration with BMW South Africa, Acsa will cover all charging station-related electricity costs for 12 months. Furthermore, BMW EV drivers will enjoy free parking at the three airports during November for a maximum of four days at a time.

This makes it possible for other EV users to park and fly as well. An EVs using the BMW ChargeNow station at the exclusive parking bay at OR Tambo International Airport.

Speaking at the launch at OR Tambo International Airport, Acsa acting chief executive officer Fundi Sithebe said the specified airports continued to break new ground in terms of innovation and the introduction of infrastructure that sought to enhance the passenger experience.

“From today, BMW EV users may drive to and from our three airports with comfort because while they travel, we will be charging their vehicles,” said Sithebe.

“We are grateful to our partner, BMW South Africa, for its partnership in this initiative. With both the vehicle and air transport sectors endeavouring to reduce their environmental impacts, services such as this will play an increasing role in coming years,” said Sithebe.

“I’d like to thank Acsa for its vision. As the move to EVs gathers pace, I imagine we’ll see more of these partnerships. We’ve been rolling out charging infrastructure across the country since we launched the BMW i3 and BMW i8 in 2015, and these charging points take our tally of BMW ChargeNow charging points to more than 60,” said Abbott.