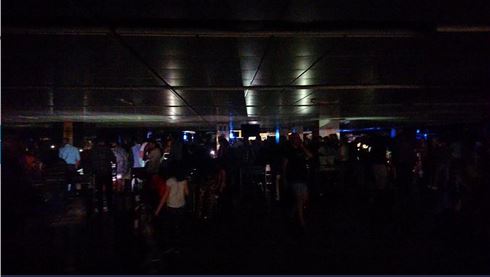 Passengers left in the dark at OR Tambo Airport. Photograph: Twitter

Only 20 flights were interrupted at OR Tambo International Airport on Sunday when an Eskom transformer in Spartan caught fire, reports Kempton Express.

But passengers were still angry, upset, and inconvenienced after the power failure.

On Tuesday afternoon, airport general manager Bongiwe Pityi-Vokwana reacted to “claims on social media and incorrect information published by some media titles”, saying: “In spite of the power interruption, the airport ecosystem handled 571 flights with more than 71,000 passengers and 39,000 departing bags processed. Twenty flights and 530 bags were affected by the power interruption, with delays averaged at 30 minutes for the flights concerned.”

One passenger tweeted: “How is it that an international airport like OR Tambo has no generators for load shedding? We are forced to look for our bags in the dark. Great impression we giving tourists.”

How is it that an international airport like OR Tambo has no generators for loadshedding? We are forced to look for our bags in the dark. Great impression we giving tourists! pic.twitter.com/k6F0w8BjXg

Pityi-Vokwana said: “As a National Key Point, the airport is licensed and regulated by the South African Civil Aviation Authority (SACAA) and adheres to global standards for critical infrastructure systems back-up to ensure the safety and security of passengers going through our airport.

“We have 45 generators which can operate for three days. We also have a large number of uninterruptable power supply (UPS) units that keep engineering and IT systems running when power is disrupted, giving generators the time required to start up.”

Every real-time disruption revealed some fresh challenges that could not be anticipated in business continuity plans. Therefore, as part of adapting our responses, the airport would now do three things, said Pityi-Vokwana.

First, run more simulations of longer power outages to understand the impact on infrastructure; second, re-assess all systems and areas that are regarded as essential services with a view to providing additional capacity from back-up generator supply; and third, re-evaluate the synchronisation and sequencing of generators to main power during supply restoration.

“Management of OR Tambo International Airport understands the frustrations of people at times such as this and we thank passengers and airport visitors for their understanding.

“We are also most appreciative of the support provided by everyone working in the airport environment. Their efforts helped to mitigate the effects of the disruption and enabled the efficient return to normal operations once power had been restored,” she added.

A total loss of power from Eskom was reported at 10.24am, and business continuity plans were activated. Back-up generators took over and various engineering and IT systems were reset at this point, the equivalent of re-booting.

The process of restoring Eskom loads ran from 12.40pm to 13.05pm. The transition from generator to mains and back is not seamless as loads are restored in phases. Some systems require 30 minutes and more before they are again fully operational.

The following systems were partially affected during the interruption: