The airline said in an email it apologised for the flight interruptions and delays, and said they were 'currently working on solutions'. 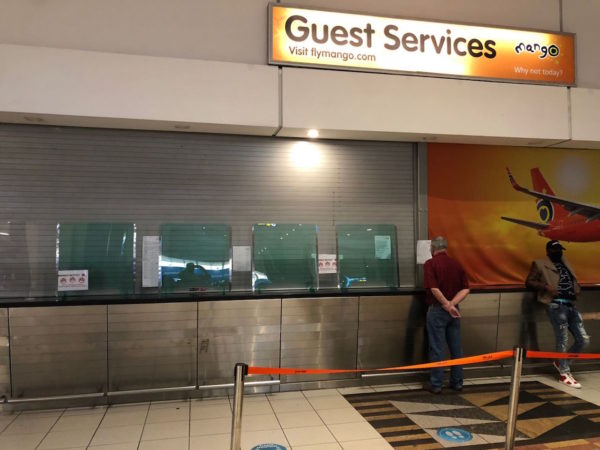 A number of Mango airlines passengers found themselves stranded at OR Tambo International Airport on Wednesday morning.

Mango staff had to be temporarily evacuated from the airline’s head office at OR Tambo just after 10:30am.

This after angry passengers attempted to break down the airline’s office doors in an attempt to get some answers.

The airline said in an email it apologised for the flight interruptions and delays, and said they were “currently working on solutions”.

They committed to being “back at the counters” and that they hoped to clear the delays “as soon as possible”.

Many passengers have been stranded across the country, some for up to five hours, as the airline remains grounded by Airports Company South Africa (ACSA) due to unpaid bills.

Mango spokesperson Benediction Zubane said that the airline was trying every possible avenue to assist passengers, yet throughout the morning, there has been no visible Mango presence.

The airline later confirmed that flights were temporarily suspended, but “for today only”.

“Senior management and our shareholder are locked in emergency discussions to find an amicable solution to this impasse.

“We ask for calm and patience as we navigate through these challenges. We will update the public as soon as possible. We apologise in advance for the inconvenience caused.”

Flights are expected to resume on Thursday.

The embattled airline on Monday removed all flights for sale from its website starting 1 May.

This confirmed that the airline would likely cease to operate from the end of April.

Mango last week said that it had not received promised funding from its shareholders, SAA and the Department of Public Enterprises.