Apart from a rise in fuel prices, an economist thinks South Africa could benefit from the conflict between Russia and Ukraine. 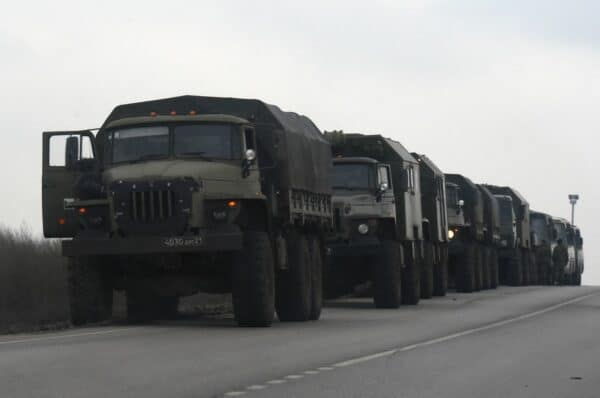 Russian military trucks are seen on the side of a road in Russia's southern Rostov region, which borders the self-proclaimed Donetsk People's Republic, on 23 February 2022. Photo: STRINGER / AFP

The conflict in Ukraine could have both positive and negative effects for South Africa, says Azar Jammine, director and chief economist of Econometrix.

Russia is a major supplier of gas and oil to Europe. After Russia’s President Vladimir Putin sent troops into two rebel regions of Ukraine on Monday, energy prices soared.

This saw global stocks falling and the oil price increasing. Jammine said that this would usually result in emerging markets suffering.

South Africa, however, has held strong.

One of the reasons for this, he says, is that commodity prices have increased.

“Commodity prices have been holding up firmly. Even before events leading up to today, oil has been doing well,” said Jammine.

The conflict between Russia and Western powers means there will be a shortage of minerals, such as palladium, and oil. This will be good and bad for South Africa.

“The shortage of palladium will benefit South Africa. However, the shortage of oil will lead to a rise in fuel prices,” said Jammine.

South Africa could also profit from the increase in prices in copper, coal, and other platinum group metals, such as rhodium. The price of gold could also go up, said Jammine.

The economist, however, added that South Africa’s economy will suffer in the long run, if war is declared between Russia and Ukraine.

“For the whole, global economic growth will suffer and South Africa will be affected by this. But, for now the country is benefitting from the commodity price increases,” said Jammine.

Japan said on Wednesday it will impose sanctions on Russia, after Moscow ordered troops into the rebel “republics” of Ukraine. The decision follows similar measures by the United States, Britain and the European Union on Tuesday.

Also on Tuesday, Germany’s Chancellor Olaf Scholz said the approval of the NordStream 2 pipeline from Russia would be suspended in response to Putin’s decision to send troops into the breakaway regions of Ukraine.