Today’s youth are also fighting against an oppressive system, but this time against their elders. 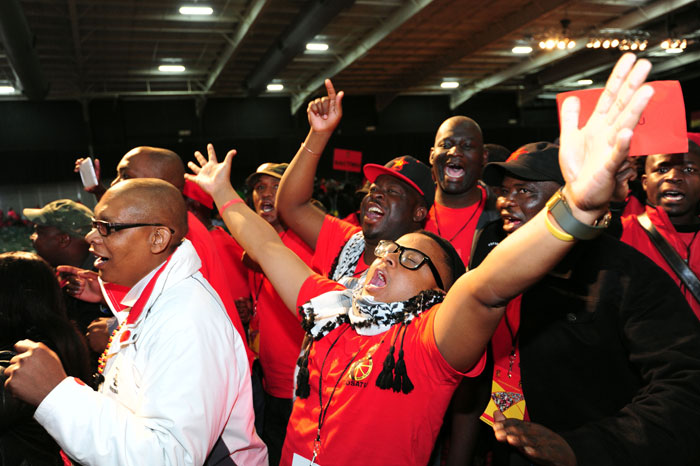 It would be a gross exaggeration to say that an era of labour movement has come to an end or that worker’s share of the economic pie has been a meaty one since the arrival of democracy. But, in conjunction with other aspects of the South African politics – on which I’ll have a word in a moment – trade unions and their federations seem to have produced a leadership that has struggled to adapt to the changing times.

Now more than ever, especially after the #WorkersDay rallies, the soft underbellies of these workers’ organisations have been exposed.

The hollowing out of trade unions’ relevance to workers shows how they’ve become a platform for old men fighting personal battles in order to hold on to power a little longer.

I’ve mentioned an aspect of our country’s politics before: the cabal of Paleolithic ideologues found in political parties and trade unions that continues to forfeit freedom of thought and sequester those who present a different mentality than the one they all agree on. Hereby hangs the second and more concerning aspect: the old men syndrome. Many of these older male leaders are found wanting and self-serving. I read and watched most of the May Day Rally speeches, and I’m sad to say most did not respond adequately to young workers rooted at the base of the working class.

Worse still, this masochism hurts the very workers whose livelihood and wellbeing these leaders are meant to safeguard. Our near-stagnant economy with chronic unemployment in the 20% range not only demoralises the unemployed, it also undermines any effort made to lift the poor out of poverty and sinks those desperately clinging to their jobs into further debt.

The failures of these old generations of leaders have led to a labour movement and a ruling elite that refuses to admit that it is being tortured, and fails to see that the pain is of its own doing.

In turn, this has seen the rise of self-organised, educated, poor or even working class black youth at the centre of a new crop of leaders, who are taking the nation by surprise and demanding services, education and the platform to be heard. The ancient unwillingness to listen led the current older generation (in our society, not just politics) to a path where they prepared the soil for the likes of the EFF and ‘fallist’ movements to rise up.

One thing that stood out at the EFF manifesto launch is how the party has managed to organise on two fronts politically: in the community through basic service delivery needs and how municipalities have failed to deliver those; and industrially in talking about issues that attract the unemployed youth, be it a graduate or school leaver.

Isn’t it ironic that the early days of black trade union activism were, in large part, a revolt against an oppressive system that sought to clamp down any ideology that confuted its own? The youth are now fighting the same battle against their elders.

I’ve never been much of a speculator of the motives of the players in our trade unions’ drama. However, I have listened to the old men of Cosatu, South African Communist Party (SACP), Association of Mineworkers and Construction Union (Amcu) and even the newly-formed (or to-be-formed) Vavi-led federation. Rather than recognising their own mistakes and undoing them, none of these trade unionists seem willing to tell their comrades of the stark truth: that without reimagining the methods and means of trade unionism in South Africa’s developmental goals, they are as good as dead. Cosatu’s leaders in particular will do almost anything to defend its gains within the alliance. But what price it will pay if staying in the alliance means being a silenced partner?

It is now an open secret that Cosatu’s influence within the alliance is in decline. It is now very much the weakest link of the alliance. Any organisation that is failing and feels its own decline badly needs to reassure itself. There have always been periods in history, not only of this country but also of humankind, where there have been uprisings, rebellions and the quest for freedom and a fair shake for every person.

Without question, we are in one of those periods of transition where trade unions, themselves, will be divided by their distinctive political strategies. Even more interesting is that we are seeing new forms of social movements emerging outside trade unions.

I’m afraid none of the #MayDayRally activities gave us a glimpse of unions that have a wider social vision. Instead workers all over the country from differing federations were subjected to old men arm wrestling each other for attention.

The business approach taken by many leaders weakens unions and reinforces the individualistic ideology which leads to accumulation of wealth and power. This is why many old generation leaders are clinging to power and refuse to yield it to the younger unionists.

Historically, interfering with people’s livelihood hasn’t served leaders well. People get angry when they can’t get what they consider essential. I truly believe that when people have lost their bearings, as a result of losing their identity through job loss and their elected union leaders fail to step in, ordinary people have nowhere to turn but to ‘prescribe a new order’.

The tone-deaf older leaders cannot see the winds of change and are holding onto archaic ideologies and ways of doing things. This will lead to a rising of self-organised young people within trade unions, because they would have seen how the current old leaders failed to come to their aid. The old leaders will be the death of trade unions as we know them. The young lions will bring in a new era and their voice will be heard roaring.